Which Professions Have the Longest Commutes?

This post was written by Dan Kopf, Priceonomics Staff Writer

The evidence is mounting that a long commute to work leads to misery.

Commuting is associated with back pain, less sleep and exercise, and worse eating choices. It takes time away from joy-inducing activities like socializing, spending time with family and watching TV. And, unfortunately, commuting takes up an increasing amount of the average American's time.

When a worker chooses her career, she rarely considers commute length. Most people’s career decisions are made at a young age, when they have never experienced excruciating traffic or the feeling of not having enough time with their children. People also likely don’t realize that, in fact, there are large differences in commuting times by industry.

We found that construction workers, lawyers and computer scientists have unusually long commutes, while teachers, food industry workers and those in the military spend less time getting to work. Commute time is generally higher for people who live in large metropolitan areas, so job types concentrated in these areas tend to have longer commutes.

We also looked into the jobs where people are most likely to use public transportation or bike. Industries heavily concentrated in New York City or university campuses are strongly correlated to using these modes of transport.

According to the data from the 2014 American Community Survey conducted by the U.S. Census Bureau, the average commute time for full time working adults who work outside the home was 26.8 minutes.

Following the Census’ classification system, we grouped professions into 24 occupational categories. They include specific groups like healthcare practitioners, as well as categories that are comprised of workers in different industries like management, which includes farm managers, education administrators and funeral directors. In large part, these categories are made up jobs that are quite similar in terms of industry or responsibilities.

The table below shows the average commute time by occupational category. Estimates are likely to be accurate to within less than half a minute. 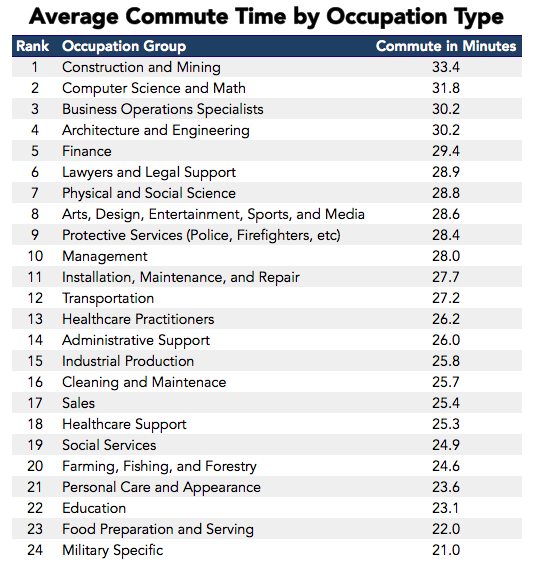 The next longest commutes belong to architects, financial manager, lawyers, and other workers who commute to downtown offices. In contrast, it is not uncommon for teachers and restaurant workers, the occupational groups with the second and third shortest commutes, to find a job in their neighborhood.

No group has a shorter commute than those in the military. A benefit of military service is free housing on base. The average military worker spends 20% less time commuting than the average American.

Besides occupation, another factor that leads to longer or shorter commutes is whether an individual lives in a rural, suburban or urban setting. The average person identified by the Census as living in a rural area has a commute of less than 23 minutes—a 30% shorter commute than those who live in urban or suburban areas.

The shorter commute times of rural workers is primarily a result of the speed at which rural commuters can drive. While a mile of travelling takes an average of two minutes in urban areas, it only takes one minute in rural areas. Considering the psychological and physical toll of sitting in traffic, rural living may seem appealing.

Does the occupation with the longest commute change if we only look at urban settings?

When we examined workers who live in metropolitan areas, the rankings only change slightly. The top spot for these non rural commuters is taken by those who work in computer science and math, followed closely by construction and mining. This may be because companies that employ computer scientists and mathematicians frequently have large “campuses” in relatively remote locations, leading to long commutes. 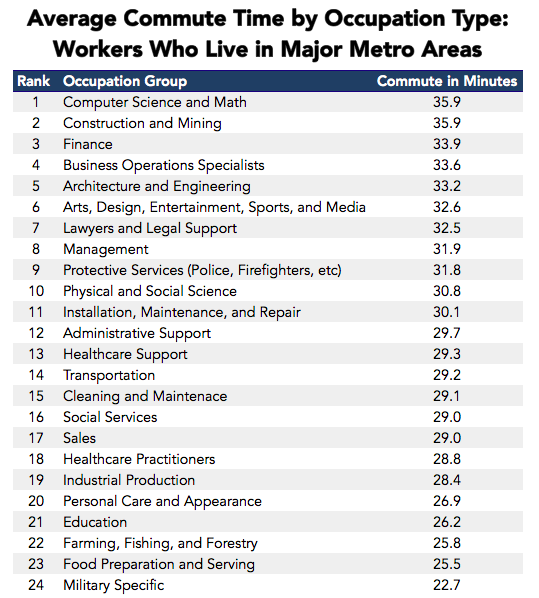 In addition to examining the length of commutes, we were curious about the members of which professions use different modes of transport. For many commuters, avoiding the monotony of driving is as important as saving time. Others value biking or taking public transport for environmental and health reasons. 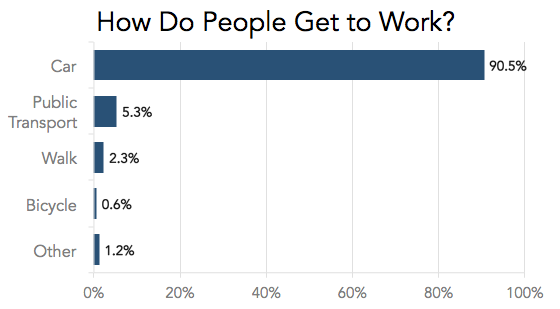 Bikers make up a very small portion of commuters at only 0.6% of the total, but they are particularly concentrated in certain professions. The next table shows the occupation groups by how likely they were to respond that they commuted by bike “on the most recent day they worked."

Food industry workers and scientists fall on opposite ends of the income spectrum. This demonstrates a truth we found in the data: a person’s occupation is a better indicator of whether they are likely to bike than their income. 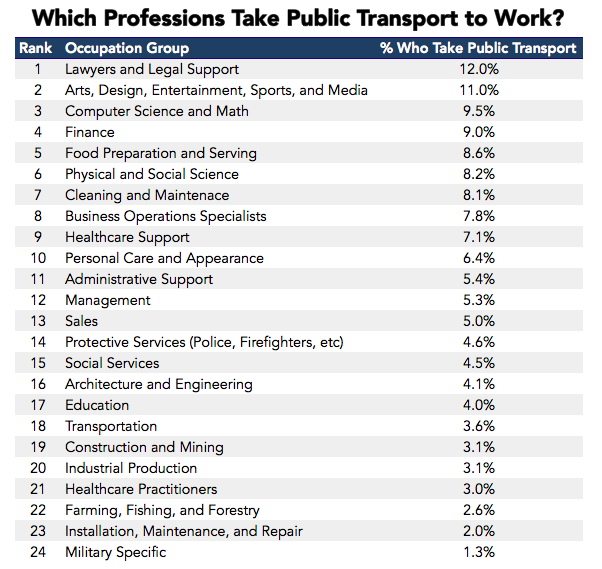 People who work in the law, finance and media are all unusually likely to take public transport. It is no coincidence that these occupations are heavily concentrated in New York City, the only place in the United State where the majority of commuters use public transportation.

Workers who need to drive during the course of their workday, like those who work in installation, maintenance and repair, use public transport least, and unsurprisingly top the charts for commuting by car. 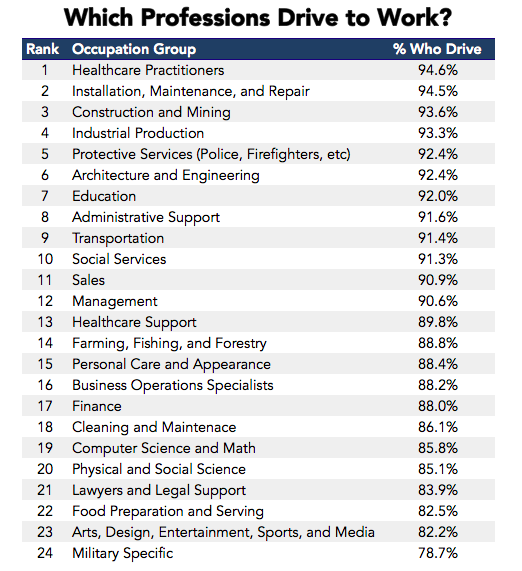 Commuting is a necessary evil in the lives of most Americans. Psychologists see it is as the time most significant source of unhappiness in our lives. But when we choose careers we rarely consider commutes. You won’t hear children say, “I want to be a teacher when I grow up because of the short commute!” But maybe they should.