Which States Have the Highest Taxes on Marijuana? 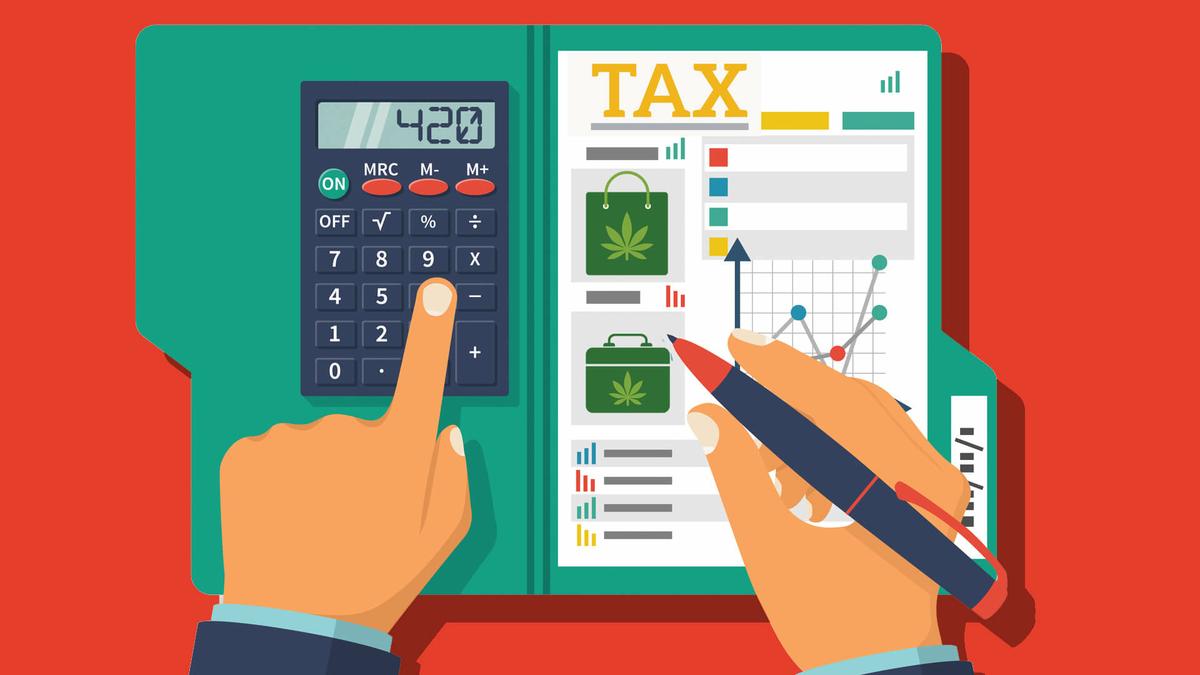 When comparing cannabis prices across states that have recreationally legalized, it’s easy to assume that the rates at which cannabis is taxed dictate the prices consumers are paying in dispensaries. For example, California has high tax rates for their cannabis, and also have some of the most expensive prices on the legal market.

As an online cannabis price comparison and dispensary locator service, Wikileaf has access to data on weed prices across the country. We ranked the recreationally legal states, first by tax rates, and then by the average cost per eighth. We found that while Washington has the highest tax on cannabis at 47%, they find themselves one of the less expensive state to buy cannabis.

Conversely, Alaska is the most expensive state to purchase cannabis in, while having lower taxes.  While taxes certainly do have an effect on the price that consumers pay for cannabis in dispensaries, Wikileaf’s data shows that the rate at which cannabis is taxed is not the only factor that dictates market price.

These are the sales tax rates on cannabis from each recreational state on consumer-facing sales taxes through January 2019: 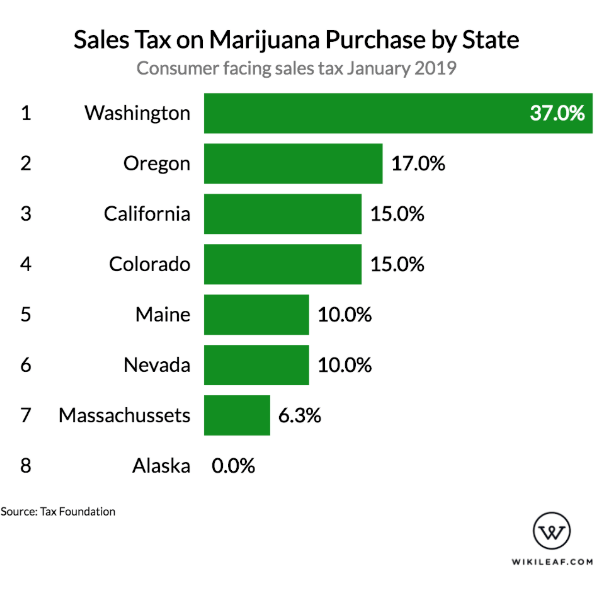 Washington tops the list, taking up to 37 percent from cannabis purchases, followed by Oregon at 17 percent, California and Colorado at 15 percent, Maine and Nevada at 10 percent and Massachusetts at 6.3 percent. Alaska is the only state on the list so far that doesn’t tax on cannabis purchases.

Sales Tax Isn’t The Only Cost Passed On To Consumers

Somewhere between 37 and 0 percent is a big difference. However, those sales tax rates aren’t the only tax you’re paying. Many states have additional taxes and fees to pair with their tax rates on purchases.

For example, while Alaska doesn’t tax their cannabis purchases, they do charge growers $50 per ounce, and growers in Maine are charged anywhere between $94 and $325 per pound on top of their 10 percent sales tax rate. These are the additional taxes that consumers end up paying per recreational state: 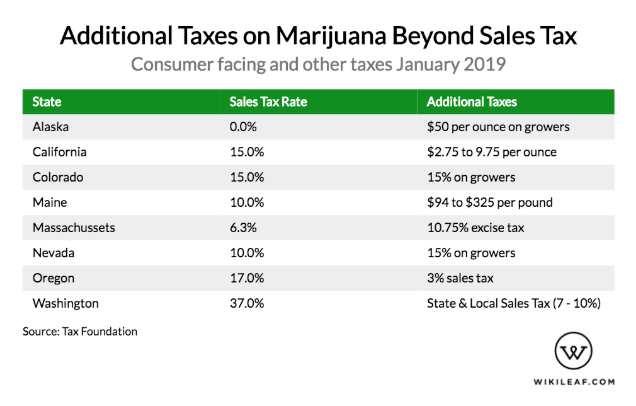 When you add up the taxes on dispensaries, growers, sales, and local government taxes, you get a fuller picture of how taxed the cannabis industry actually is. With all of those costs together, here’s a clearer picture of which states are collecting the most from legal cannabis. 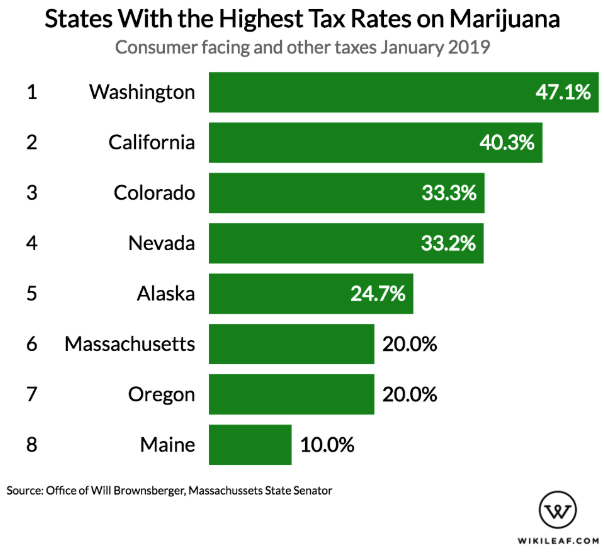 Washington cannabis is taxed at 47.1%, making that state’s marijuana the most taxed in the country. California comes in second, at a tax rate of 40.3%. Yet, according to Wikileaf’s menu data below, the average price of an eighth after all taxes in Washington is the fifth most expensive out of eight states, while California comes in two spots more expensive. 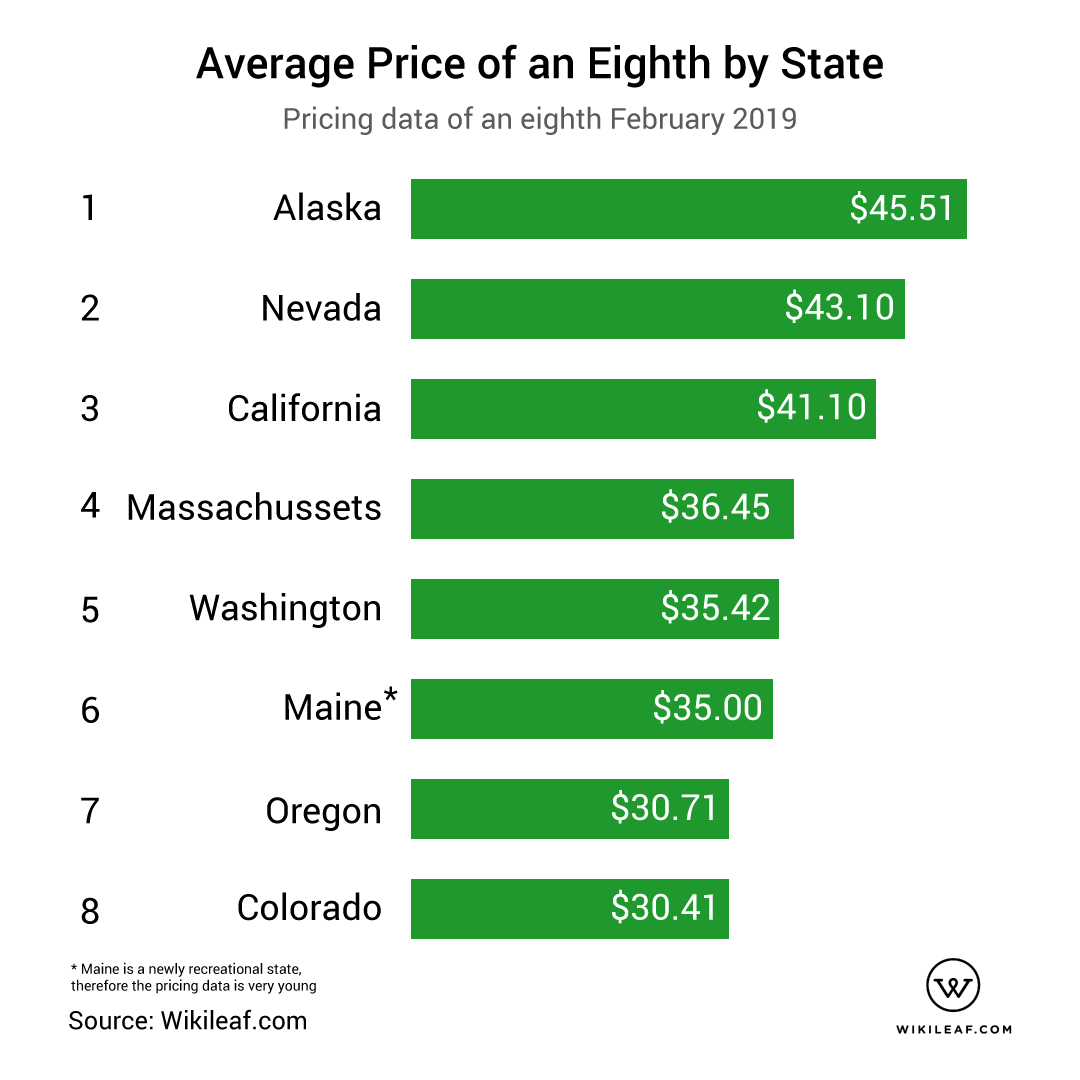 If taxes are the main reason why cannabis prices are high, then it’s tough to explain why, despite Washingtonian cannabis buyers being taxed 7 percent more overall than Californians, their price per eighth is around $8 less. What’s even more surprising is Alaska, only the fifth most taxed state, is actually the most expensive state to purchase weed in. So while there may be a correlation between taxes and prices, our data indicates that there is not a direct causal relationship between the two.

Since each state has its own regulations and framework for recreational cannabis, there isn’t any blanket reason for why prices are the way they are across all states. However, those particular factors that affect the price of cannabis in every single state all seem to affect one thing: supply. Let’s look closer at California as an example.

California: Other Causes of High Prices

California has an extensive application process for obtaining their licenses, one that has been muddled with roadblocks. This makes it both difficult AND expensive to obtain legal licenses, severely choking off the cannabis supply in a state once flush with legal weed. According to Bloomberg, there were a grand total of 1,100 registered cannabis dispensaries in the state prior to legalization. Now, there are only 410 registered dispensaries.

Considering that those 410 dispensaries are competing with a massive Californian black market (which estimates say is much larger than the current legal market in 2018,) the industry in California is worse off than it seems. 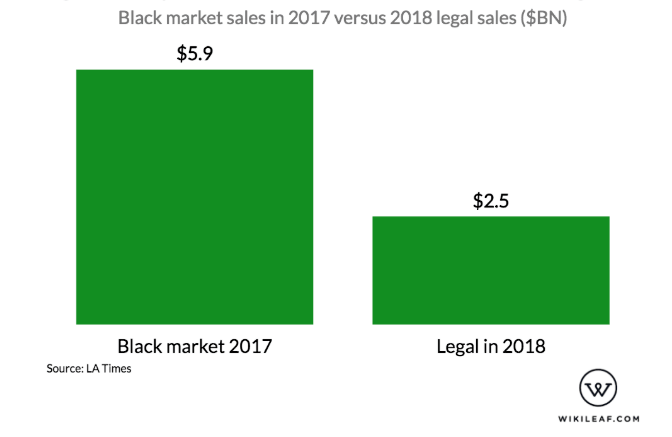 According to those estimates, the legal sales in California totaling $2.5 billion in 2018 are more than doubled by the nearly 5.9 billion the black market accounted for in 2017. That’s a massive portion of a very lucrative pie that the legal cannabis industry in California has to contend with.

On top of the red tape and political issues, the supply (volume of growers) and environmental factors need to be considered as well. Droughts and wildfires raging through the state has limited crop yields and driven up the prices, with some producers claiming to have lost as much as an entire year’s crop in the most recent wildfires.

While taxes certainly do affect the price of weed, they don’t tell the whole story. We took data that ranked recreationally legal states in order of highest tax rates and compared it against Wikileaf’s pricing data for the average cost of an eighth in each of these states. If the rates at which each state taxes cannabis determines its market price, then you would expect the rankings from the two data sets to match. However, the fact that they don’t match leads us to two conclusions. The first is that there is a correlative, not causal, relationship between taxes and marijuana prices. The second conclusion is that there are other culprits for both high and low prices of cannabis, such as in the case of California.