Who Still Lives at Home with Their Parents? 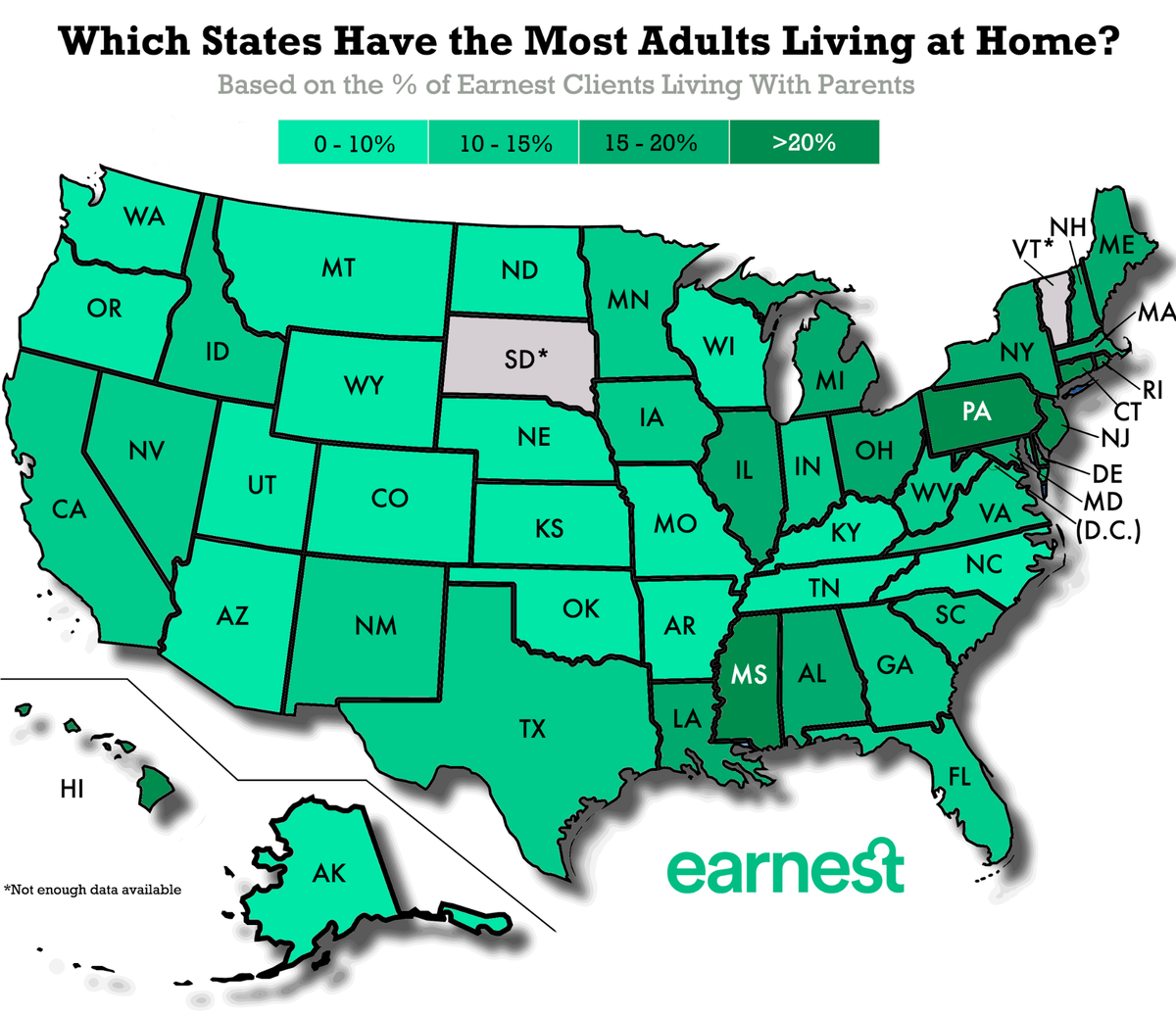 Living at home with your parents isn't just for little kids anymore. Young adults are now more likely to live with their parents than in any other living arrangement, according to a recent report by the Pew Research Center. Recent college grads aren’t alone; adults in the 25-29 and 30-34 age brackets are also moving home in record numbers.

What forces are steering people into their parents’ basements? We wanted to find out, so we analyzed data from Earnest, a Priceonomics customer. We analyzed a dataset of more than 60,000 user responses to questions about their living situations to understand how it's influenced by factors like gender, age, location, and education.

In our sample, 15% of the adults live with their parents. But that figure is higher in parts of the country with a high cost of living, underscoring the fact that income is a key determinant of living situation. Accordingly, people who have greater earning potential—as a result of earning a graduate degree or specializing in science, technology, engineering, or math (the STEM fields)—are the most likely to live independently.

We first wanted to look at the impact of gender on living arrangement. The chart below shows the proportion of males and females in our sample who live with their parents. 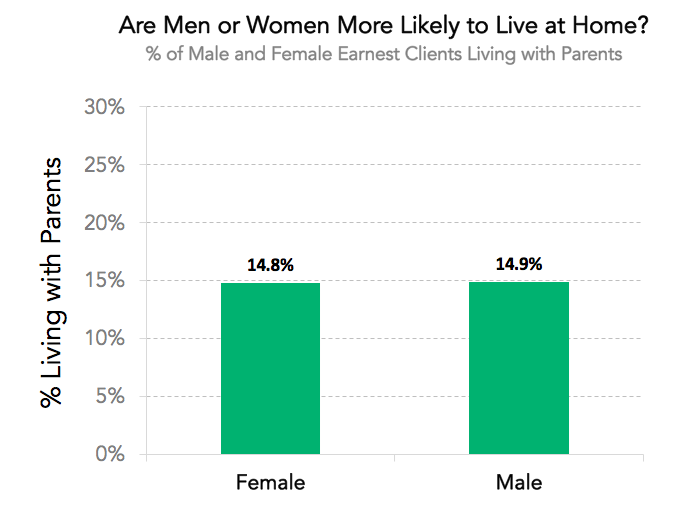 Men have gotten press lately for earning degrees at lower rates than women and entering the workplace in decreasing numbers. But we found that males and females are virtually even when it comes to living at home.

We next considered age. Is it fair to characterize people who live at home mostly as recent college grads? We broke our sample into eight age groups and charted the percentage of each group that lives with their parents below. 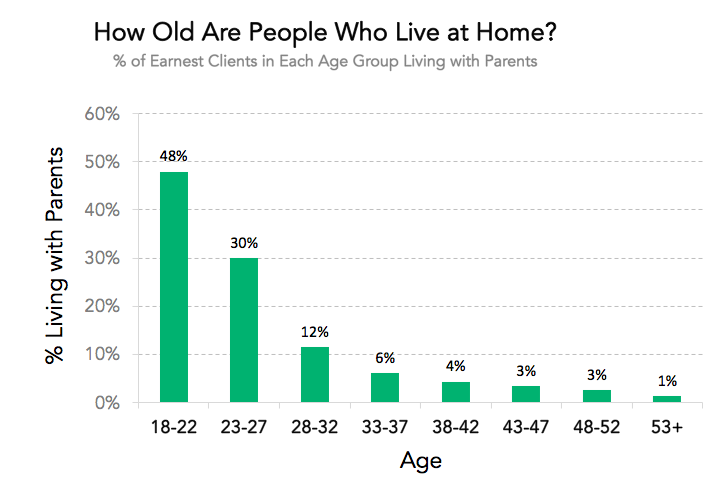 Indeed, younger adults are far more likely than older ones to live with their parents. In our sample, the average age of a person living at home was 27. The average renter and owner were 31 and 37, respectively.

At the tail end of this graph, we see a small number of older adults reporting to live with their parents. This could represent a group that lives with elderly parents to provide care.

We wanted to know where these multigenerational households are located. Are they equally common across the country, or are there hotspots where adults are more likely to live at home? We calculated the percentage of the population that lives at home in each state for which we had at least 10 responses. 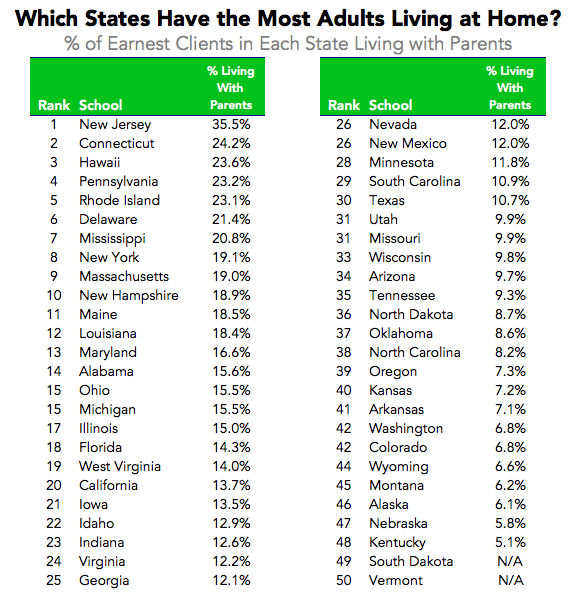 Likelihood of living at home varies by location. More adults live with their parents in places like Hawaii and the New York metropolitan area—areas where the cost of living, and thus the bar one must clear to live independently, is high.

Conversely, states in the middle of the country are associated with both a lower cost of living and a larger proportion of independent adults. Indeed, our map resembles maps that show the cost of living across the United States.

If cost of living influences living arrangements, people are likely living at home out of financial necessity. We would then expect income to be low among people who live with their parents. Is it?

For each of four income brackets, we calculated the percentage of adults living at home, considering only the respondents who specified an income. Users who left this field blank were not included. 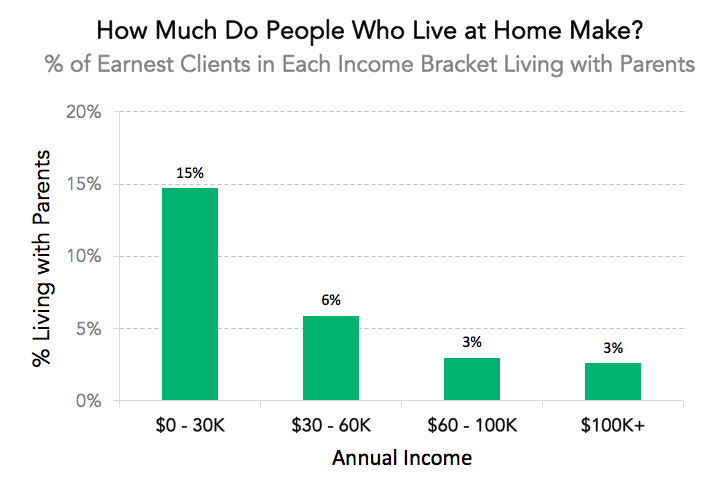 Our data suggest that people who live at home do so because they can’t afford to live independently. This group makes an average annual income of around $6,000. That’s not enough to pay the rent, no matter which state you live in.

Yet, some people who live at home make a wage that should allow them to live independently. Like the older groups in our age analysis, these high earners could be older adults in established households who live with elderly parents to provide, not receive, support.

A person’s income is strongly influenced by their education. Are those who live at home less educated than their independent counterparts? We grouped our data based on highest degree attained, then calculated the percentage of each group that lives with their parents. 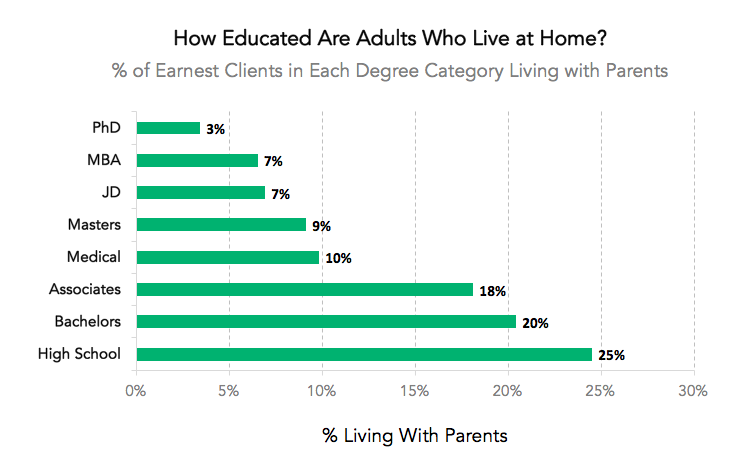 In general, having more education means it’s less likely you’ll live at home: just 3% of PhDs live with their parents, versus a quarter of those with only a high school diploma.

Surprisingly, a two-year associate’s degree grants more independence than a bachelor’s: 18% of associate’s degree-holders live with their parents, compared to 20% of bachelor’s-holders. This could be owing to the greater student loan burden faced by the latter group.

Even within one of these categories, not all degrees are created equal. A bachelor’s degree in a STEM discipline may offer access to more lucrative jobs than one in the humanities. Does it also affect living situation?

We grouped our sample based on self-reported major and charted the percentage of each group that lives at home below. 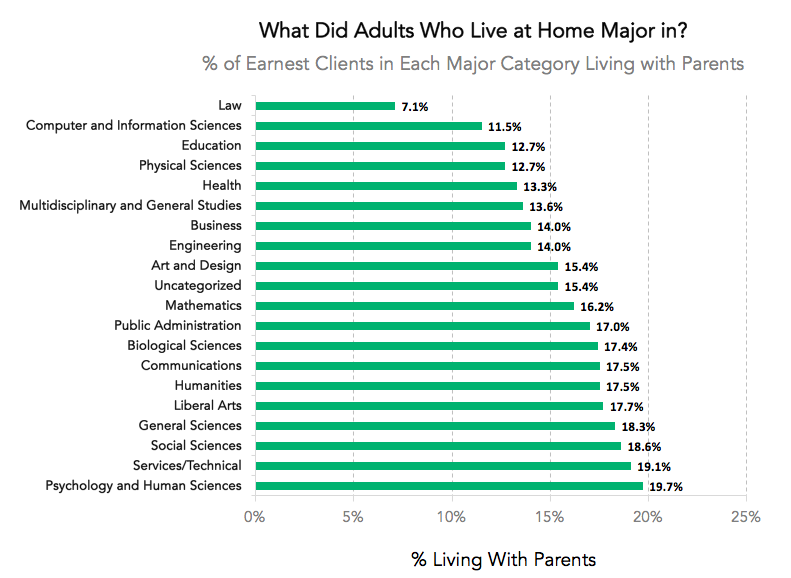 Just 8.2 percentage points separate all majors we considered, except law. Compare this to the 22-point spread between PhD-holders and high school grads in our degree analysis above. What you study matters less than the level of education you attain.

That said, students of the hard sciences, plus law and education, are more likely to live away from home, whereas students of the humanities and “soft” sciences like psychology have more trouble leaving the nest.

But a person’s independence is likely determined by a combination of what they study and the level of education they attain. Entry level jobs in STEM may pay as well as jobs held by PhDs in non-STEM fields. Does that translate to more independence in living situation?

To find out, we grouped our sample by highest degree attained and major (classified simply as STEM or non-STEM). The percentage of each group living at home is displayed below. 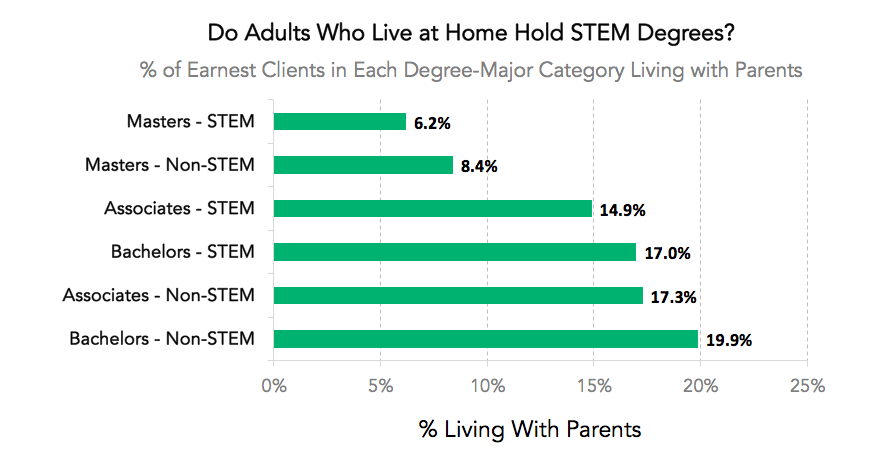 Having a graduate degree in any discipline matters more than having it in any particular one: individuals with master’s degrees—in STEM or not—live at home in the lowest numbers.

But for bachelor’s and associate’s degree-seekers, major matters. For both degrees, STEM students are less likely to live at home than are non-STEM majors. Associate’s degree-holders in STEM are also more independent than holders of STEM or non-STEM bachelor’s degrees. Again, this may be due to the higher student loan burden faced by graduates of 4-year schools.

So what should you do if you’d like to live independently? Our data indicate that it’s all about income.

First, live in an affordable state. Avoiding the coasts, and certainly the New York metropolitan area, would be a good idea.

Seeking education should also be a priority. Earning a bachelor’s or associate’s degree will reduce your chances of living at home, and signing up for a graduate degree will further increase your independence.

Finally, studying STEM will also help boost you out of the nest. In every degree program we considered, STEM majors lived at home less often than did students of non-STEM disciplines.