Why is Bear Bile So Expensive? 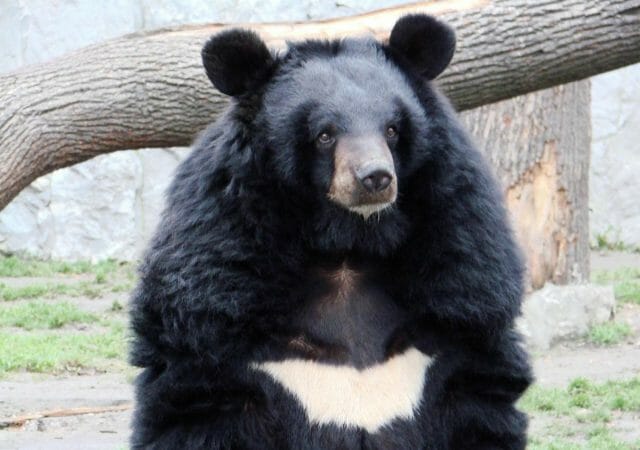 In 1991 the New York Police Department had an unusual homicide on their hands. Haeng Gu Lee, of 170 72nd Street, had been stabbed to death in his apartment on a Saturday night. The killer or killers had ransacked the apartment before leaving, and the police suspected a robbery-homicide.

New York City’s violent crime rate peaked in 1990, so this was just another night in early ‘90s Brooklyn, right? Wrong. One key detail: when the police arrived at the apartment, there was bear fur everywhere.

It turned out that the victim, Lee, was an international dealer. He didn’t trade in arms, jewels, nor narcotics. Lee sold animal parts and viscera overseas for use in traditional medicines, and it appeared someone had killed him for them. Three freezers had been cleared out of their valuable contents: bear gallbladders.

“This is obviously a unique and challenging case,” Detective Thomas Dade told the press. “We’re dealing with a subject that’s pretty foreign to us. But we do know […] there’s a lot of money involved.”

Depending on where they were exported to, the gall bladders could fetch a pretty penny. “A gallbladder which will sell in Idaho for about $15 will sell in Hawaii for $1,500 and in Korea for $15,000,” Ed Espinoza of the Federal Fish and Wildlife Service told the New York Times.

With a scale like that, you could make some serious money exporting gross bear parts. 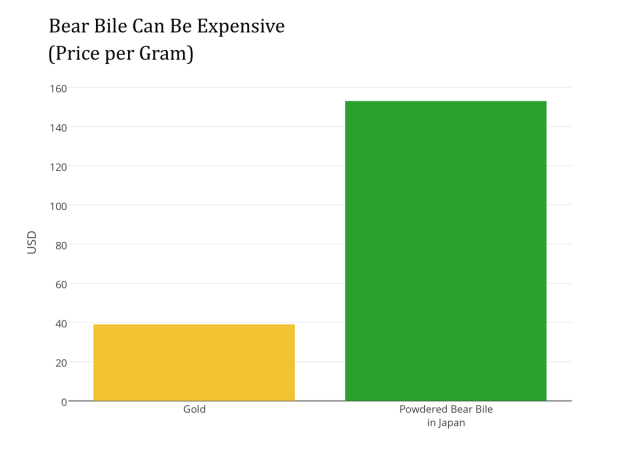 You still can. There isn’t as much of an American market for bear bile, the fluid found within a bear’s gallbladder. If you know where and how to sell it without getting pinched, you might get a couple hundred dollars for a gallbladder, domestically. But bear bile is a prized substance in East Asian traditional medicine. And although much has changed in the past 25 years, in many countries bear bile has maintained its value. An investigation from 2011 showed that in Japan, powdered bear bile is sold for an average rate of $153 (American) a gram — 4 times its weight in gold. Depending on the size of the gallbladder, it could be worth tens of thousands of dollars in a foreign market.

What’s in a Gallbladder? 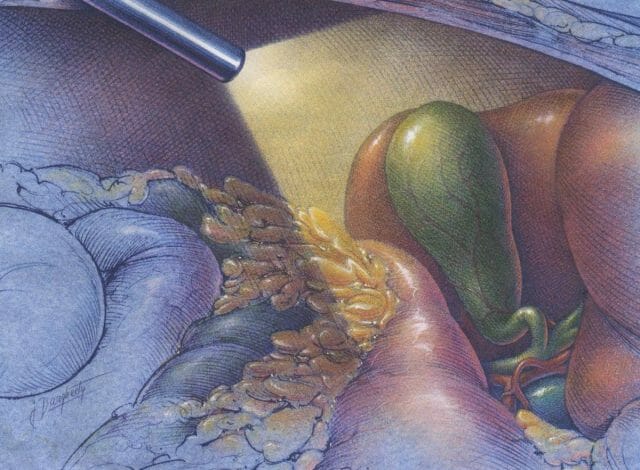 Illustration of a gallbladder under a laproscope, cropped (Rusty Tanton)

When it comes to the battle between traditional medicine and what’s called “evidence based medicine,” (Western medicine), bear bile stands apart. Whereas rhino horn’s powers in curing seizure and fever, and tiger penis’s power as an aphrodisiac are at odds with modern science, there’s good reason to suspect Bear bile actually has some medicinal applications.

Bear gallbladders are special because bears hibernate. They go into a deep sleep for 3 to 8 months out of the year, depending on the climate. In that time they do not eat, urinate, or defecate, but they somewhat miraculously lose a lot of fat but not much muscle. This is because their body’s digestive tract recycles and reprocesses waste, and it feeds on the extra fat put-on before hibernation. This slow-cooked digestion takes some pretty specialized bile. Bear gallbladders have a very high concentration of what’s called ursodeoxycholic acid in their gallbladders, particularly in the winter.

Urosdeoxycholic acid breaks down clumps of molecules containing cholesterol, while at the same time slowing down the small intestine’s absorption of cholesterol. In humans, ursodeoxycholic acid is an effective, non-surgical treatment for gallstones. It also treats certain kinds of cirrhosis. (There’s even evidence that it inhibits the growth of tumors and thus helps prevent colon cancer.)

So there’s one reason why bear gallbladders are so expensive: they have serious medicinal properties, which makes them inherently valuable. Sort of.

The thing is that once modern scientists figured out this whole “bear bile actually has something really, really useful in it,” they figured out ways to get it without using actual bear bile. Since the 1950s, it’s been synthesized from the bile of domestic animals like oxen and chickens, already raised and slaughtered for their meat. Synthetic ursodeoxycholic acid is the active agent in the US prescription drug “Actigall.”

With a different commodity, like kerosene did to the demand for whale oil, the availability of cheaper, more efficient alternatives would have killed the demand for bear bladders. But traditional medicine cures tend not to call for “ursodeoxycholic acid”. They call for “bear bile” — from actual bears. Most bear bile products are black market, making them hard to track. In 2011, TRAFFIC, an NGO that monitors wildlife trade, reported they found bear bile products for sale in markets in 12 Asian countries and territories. That’s bad news for bears.

Where Have All the Bears Gone? 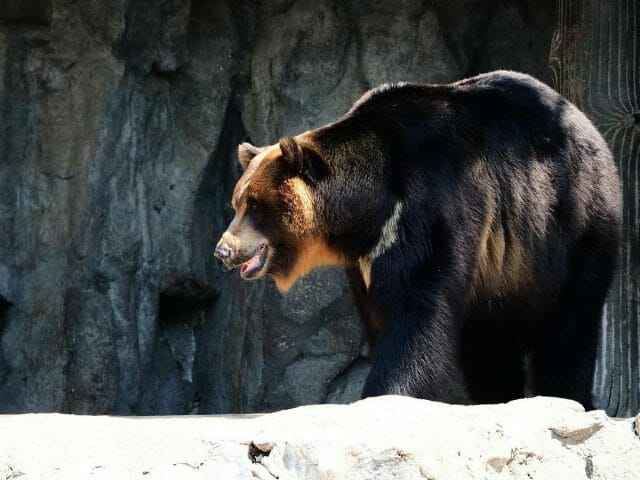 The other things driving bear bile prices up is the diminishing supply, and the complicated federal and international laws surrounding its trade and production.

As Asia continues to develop economically, logging throughout the continent has steadily wiped out bear habitat. By the early 1990s, the bear habitat in China was reduced to one-fifth of the area that existed before the 1940s. As people started settling in what used to be wilderness, bears and humans came into more frequent contact. This lead to an increase in hunting, which was followed by a steady decline in yields — suggesting a decline in the bear population.

As wild bears became scarcer, hunting them became more difficult legally, too. Most Asian bear species enjoy some amount of legal “protection” from hunting, in most countries including China, Korea and Japan. And international trade in bear parts is prohibited by the Convention on International Trade in Endangered Species of Wild Fauna and Flora (CITES) international agreement.

As a consequence, the practice of bear “farming” sprung up in the 1980s. The idea was to keep and breed captive bears, and regularly “milk” their gallbladders for bile. As you might imagine the milking process is pretty gruesome — involving catheters and permanent holes into the bears’ viscera — and oversight of the industry is poor. The conditions in most of these “farms” are horrific and potentially unsanitary. According to the New York Times, there are an estimated 10,000 farmed bears in China, 3,000 in Vietnam, and at least 1,000 in South Korea. 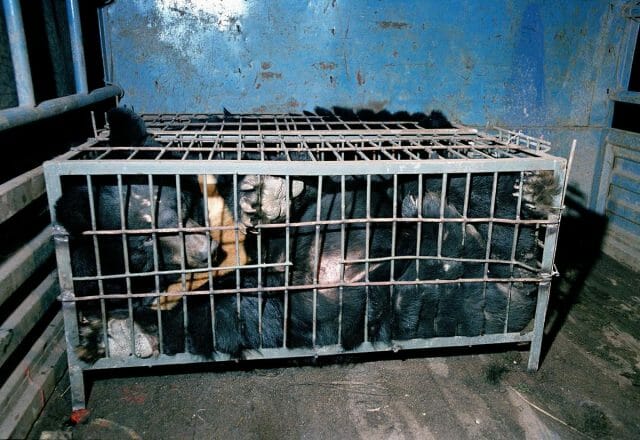 On top of that, many bear “farms” are also not real farms. Bear breeding is costly and expensive, and there’s evidence that many breeders opt instead to steal their animals from the wild. “Approximately 30% of rescued bears at our sanctuary in Chengdu are missing limbs or have obvious snare or trap wounds indicating that they were wild caught,” Jill Robinson, head of Animals Asia told The Guardian.

So the wild bear population continues to diminish, as Asia’s consumer class continues to grow. Poachers continue to trap wild bears to supply these farms. They also continue to hunt them for their gallbladders. Many consumers prefer wild bear bile to “farmed” bear bile, so wild bear bladders fetch a higher price. As Christopher Servheen, a biologist for the World Conservation Union, put it, “It’s the same reason people would pay more for vitamin C made from rose hips even though it’s the same molecule.” From a 2002 article in Legal Affairs magazine:

[W]hen patients believe “wild” is better, it’s hard to convince them otherwise, even if it will save them money. A lot of money. A kilogram of farmed bear bile might cost $240, while the same amount from a wild bear could cost $15,730.

TRAFFIC’s 2011 study of the bear bile market throughout Asia found that average prices vary widely between countries, along with the demand for bear bile, the size of the supply, and the quality of that supply. In China, a country that farms bears for bile, the average price for powdered bile was $3 a gram. Japan’s prices are the highest, at an average of $153 a gram for powdered bile. 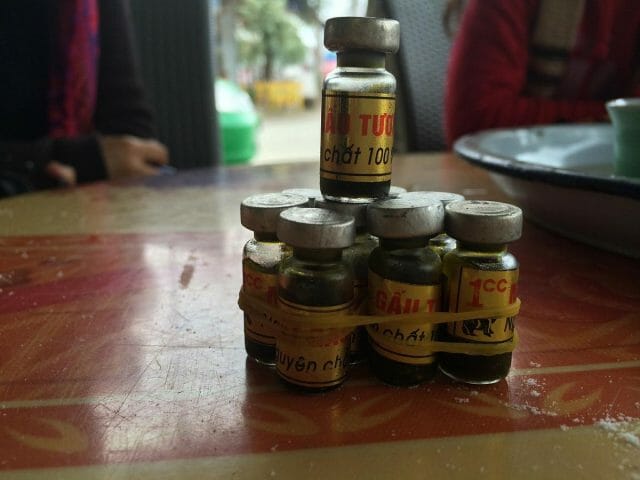 Most U.S. states regulate bear hunting, and have banned trade in bear gallbladders and biles. But because of the messy patchwork of state laws and interstate and international trade, prosecution is sometimes tricky. American poaching continues, driven by a ravenous market. From an NPR story on the subject:

The U.S. Fish and Wildlife Service says grizzly and black bear poaching for Asian markets has been a problem nationwide for years, with recent investigations and prosecutions in the Pacific Northwest and several Southern states.

In the meantime, animal rights groups have shifted their focus to convincing practitioners — doctors in traditional medicine — to stop recommending authentic bear bile to their patients. “There are more than 50 herbal [and] legal alternatives that we would also strongly encourage practitioners and retailers to recommend to consumers,” a representative from TRAFFIC told The Guardian. “If practitioners move towards these alternatives, consumers would follow.”