Why Nobel-Winning Scientists are Getting Older

William Lawrence Bragg won a Nobel Prize when he was 25. What are you doing with your life?

In 1915 William Lawrence Bragg won the Nobel Prize in Physics, for “services in the analysis of crystal structure by means of X-ray.” He was born in 1890, and at the time of the award, he was only 25 years old. At the time of his discovery, which makes it possible to study the atomic structure of a crystal by observing the way it deflects an X-ray beam, he was 22-year-old research student.

If you’re over the age of 25, knowing about Bragg might make you feel kind of bad about yourself and what you’ve done with your life. It’s not a fair comparison, though: it’s much harder for a young person to win a Nobel Prize in science nowadays.

Though Bragg is no longer the youngest Nobel Laureate of all time — Malala Yousafzai won the Nobel Peace Prize this past year, at age 17 — he is still the youngest in the sciences. And odds are good he’ll stay the youngest for a long time: Nobel Prize-winning scientists are trending older. In 1915, when Bragg won, the mean age of all the winners in chemistry, physics, and physiology and medicine was 40. In 2013, it was 71.

It turns out that Nobel-winning scientists are waiting longer and longer for their prizes as time goes on. And today’s winners are making their award-winning discoveries later in life. The age of Nobel Prize-winning scientists, at the time of award; Priceonomics; Data source: Nobel Prize

Waiting for the Swedes to Call

When it comes to age and innovation, the rule of thumb has always been that younger is better. The idea is that younger people are better at questioning assumptions other people take for granted, and thinking “outside the box.” Nobel-winning physicist Paul Dirac even wrote a poem about it:

Age is, of course, a fever chill

that every physicist must fear.

He is better dead than living still

when once he is past his thirtieth year.

Whether Dirac actually felt like he was “better dead than living still,” when he was in his thirties, we don’t know. But had Dirac died in his “thirtieth year,” he never would have gotten his Nobel, as it is not awarded posthumously. He won the prize at the age of 31, alongside 46-year-old Erwin Shcrödinger, “for the discovery of new productive forms of atomic theory,” in 1933.

To be fair to his poem, Dirac had made his winning discovery five years earlier, at age 26.

This lag time, between when a scientist makes a discovery and when he is recognized for it, is definitely part of the aging laureate equation. According to a coalition of scientists who authored an article titled ‘The Nobel Prize Delay’, that wait has gotten significantly longer. And the rate of its increase is faster than linear, in each field: 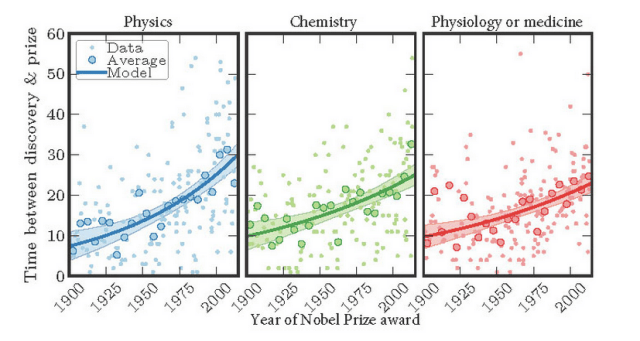 The researchers also point out that “long” waits, exceeding 20 years, have become the norm in all three of the hard science categories. The wait is increasing in all three categories, but getting longest, fastest, in physics.

“In all fields,” they write, “the frequency of the prize being awarded more than 20 years after discovery is increasing. [A]bout 60% of physics, 52% of chemistry, and 49% of medicine prizes were awarded following a post-discovery delay of more than 20 years.”

The longest wait in recent history was award of the Nobel Prize in Physics to Peter Higgs and François Englert. They were selected for their theory predicting the Higgs boson particle. The particle wasn’t actually discovered until 2012, so the award wasn’t given until 2013. They published their theory in 1964: Higgs and Englert waited 49 years.

(The 84-year-old Higgs didn’t have a mobile phone, and was out to lunch when the announcement was made. He had no idea he had won until a passing motorist stopped to congratulate him on the “news.” As he told the BBC, “I said, ‘Oh, what news?’”) 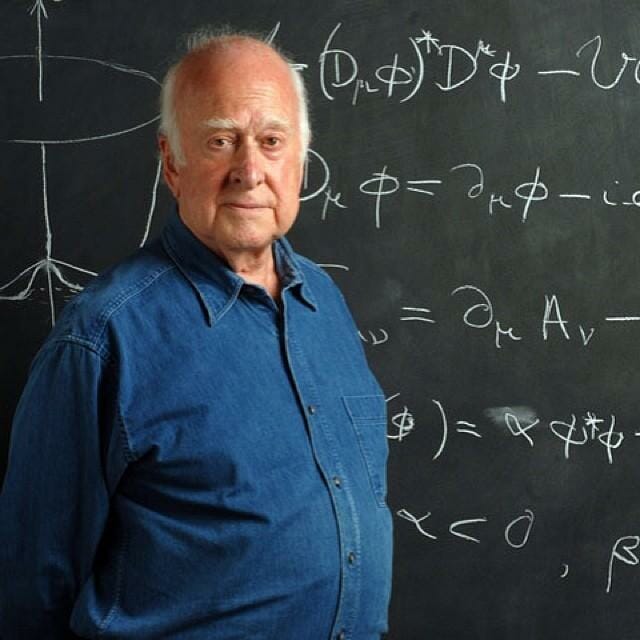 The Shoulders of Increasingly Gigantic Giants

There are a lot of factors at play here. Over the past century, the median age has gotten higher, in general; as has life-expectancy. But the authors hypothesize that the increasing wait for a prize is evidence that innovation is actually “stalling-out” in the sciences, particularly physics.

Their theory is supported by research by Benjamin Jones and Bruce Weinberg, who discovered that scientists are winning Nobels for discoveries made later and later in life — i.e. Nobel-winners are trending older both at time of award and time of discovery. They also found that this effect was robust to demographics. “There has been a large shift,” they write, “even when controlling for an aging population.”

Jones and Weinberg attribute this chiefly to the fact that, as the sciences have developed and expanded, innovators have needed more and more training. As Isaac Newton wrote in a letter in 1676, “If I have seen further it is by standing on the shoulders of giants.” It seems the giants of physics, chemistry, physiology & medicine have gotten taller. And they take more time to scale.

“[T]here has been a large upward trend in the age at which innovators begin their active careers,” they write. “The estimates suggest that, on average, the great minds of the 20th Century typically became research active at age 23 at the start of the [c]entury, but only at age 31 at the end.”

Related to this, the age at which Nobel-winning scientist received their Ph.D.s increased over the 20th Century. 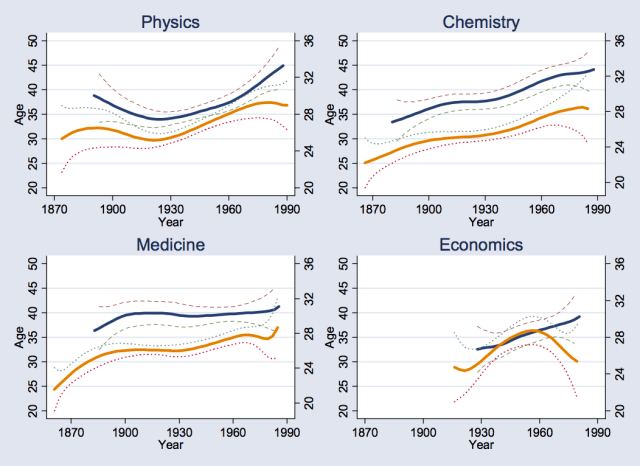 Fan regression on the average ages of Nobel Laureates at Ph.D. (Orange), and at award (Dark Blue) over time; Source: Jones and Weinberg

This is a stark contrast with the tech industry, where the cult of youth is as robust as ever. The stereotype of a visionary tech founder is as a hoodie-wearing wunderkind, recently dropped out of a prestigious college. If you want to shake things up as a scientist, you darn well better stay in school. In order to really contribute to a field, you need to understand it, and in the sciences that takes a lot of work. It takes more now than ever before.

This trend is somewhat troubling. For one, it’s bad for the scientists. As one author of “The Nobel Prize Delay” observed, “If this trend continues, some candidates might not live long enough to attend their Nobel ceremonies.”

There are worse consequences, though: Jones and Weinberg noticed that even though scientists are beginning their careers at a later age, they’re ending their careers at about the same age as their predecessors. Today’s great minds are productive for a shorter period of time than they were a century ago.

“The shorter the period that innovators spend innovating, the less their output as individuals,” Jones and Weinberg explain. They found a similar pattern in the ages of ‘great inventors’ of the 20th Century at the time of their most significant inventions. This, they speculate, could lead to the stagnation of technological progress overall.

Still, there is hope. “New ideas sometimes serve as revolutions,” Jones and Weinberg comment. Revolutions tend to favor the young. The average age-at-discovery, in physics, took a dip at the beginning of the century. This is where Einstein came in, who published his general theory of relativity at 26, and Dirac, who wrote the “fever chill” poem. They attribute this to the impact of quantum mechanics at the beginning of the century, when “the entire worldview of physics changed”:

“From a training point of view, physicists found themselves in the early 1900s wrestling with a new, limited set of empirical puzzles and the failure of existing theory, allowing young minds to achieve the research frontier relatively easily. The firm establishment of quantum mechanics in the late 1920s then led back towards normal science, a long period of accumulation and refinement that has continued since.”

In the wake of a paradigm shift, younger scientists tend to flourish, because they’re less mired in the old paradigm. As Jones has commented, “If there are future revolutions out there, it may make people younger yet again.”