If you are an avid TV watcher, you probably wish that you could pick and choose the channels you want instead of paying a lump sum for all of cable. Wouldn’t it be nice if a nice tech company came along that allowed you to pay for what you watch and nothing else?

It’s sounds great. But if you’re a fan of high-quality shows like Mad Men and House of Cards, then it could actually be a catastrophe. As The Atlantic reports, the reason that television is experiencing a golden age of great television (let’s assume they’re right about the golden age thing and follow their argument) has everything to do with business models.

In Hollywood, producers of movies know that franchises are the most safe and profitable option. They perform better in the international markets (2/3 of top-grossing films’ revenue), provide more opportunities for merchandising, and allow for a steady stream of safe but profitable sequels.

In broadcast television, however, the business model of selling ads results in a strong preference for reality television and generic sitcoms that appeal to everyone. In The Atlantic’s words:

“If you own a broadcast channel, your job is to develop as many shows as possible that attract a wide audience. The formal term for most of these shows is ‘produced for a mass audience’ but the common term is ‘relentless crap.’” 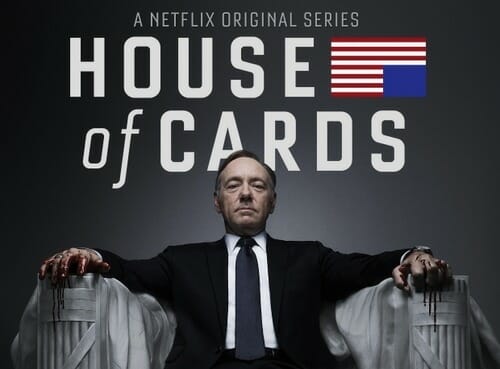 One of the most famous examples of this is Lloyd Braun, the man who greenlighted ABC’s hit show Lost, who was fired before the show even aired for giving the go ahead to such an expensive and risky project.

In contrast, cable stations make money by being included in cable packages. They receive the same cut from every cable subscription, regardless of whether the subscriber actually watches the channel’s programming. As a result, cable stations like AMC and HBO have an incentive to take risks and lavish money in the search for a few hits that – even if they are watched by relatively few people – will be high-profile enough to justify the station’s inclusion in cable packages:

“If you own a cable channel, your first goal is to develop a handful of ‘hits’ that get you on that bundle to get guaranteed monthly income from tens of millions of subscribers. The rest of your lineup can be cheap Law & Order and House reruns, for all you care. Ratings don’t matter as much if advertising doesn’t matter as much. America’s ‘best’ shows — like Breaking Bad and Mad Men — are all ratings dogs, each struggling to get a Nielsen rating higher than 3. But it doesn’t matter, because AMC’s cost structure allows for a few elite shows, one huge show (Walking Dead), and a lot of reruns.”

For those doubting the logic here, a good piece of evidence comes from this Wired infographic that shows how cable stations have won an increasing share of Emmy nominations over time: 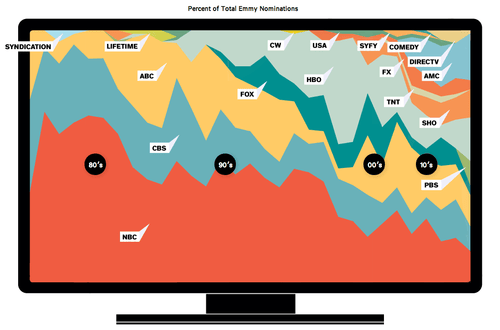 Enter Google TV and Apple TV, products that allow you to watch TV shows from the Apple Store or sources like Hulu Plus on your television. Consumers could already do this on a laptop or smartphone, but Google and Apple promised consumers a future free from cable companies forcing you to pay for content you didn’t want.

Fearing a threat to their profits, the content empires mostly refused to cooperate. Content providers did not allow Google TV to stream much of their content and Apple TV, although doing well with movies, has struggled to get enough television content.

This could be viewed as the industry’s dinosaurs standing in the way of progress. But if Google and Apple took over content distribution in television, the business model for all of TV would look like it does in broadcast television. Instead of producing crappy shows with mass appeal to sell ads, the business model would incentivize everyone to make crappy shows with mass appeal to get 99 cent downloads. There’d be little reason to produce shows like Mad Men that win Emmys but lose ratings.

At Priceonomics, we’d love to see enterprising companies cut costs through à la carte pricing. We just want someone to figure out how to do it without destroying the business model that created all the shows we love.