Why You Don’t Want To Walk Drunk

That, at least, is the conclusion of journalist Stephen Dubner and economist Steven Levitt, both of Freakonomics fame, in a podcast released at the beginning of this year. 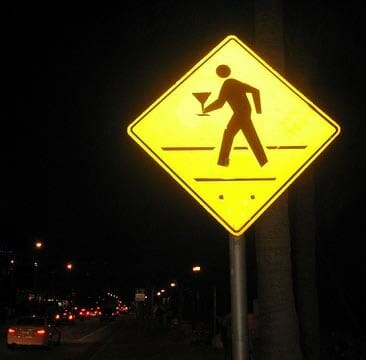 Analyzing the data of traffic related deaths, Steven Levitt finds that the odds of being killed by walking a mile drunk is higher than the odds of driving that same mile drunk. Although the dangers of drunkenly driving a car off the road or into oncoming traffic is widely preached, the dangers of stumbling into traffic or down a flight of stairs is not.

That said, walking drunk is not necessarily more dangerous than drunk driving. There is no authoritative government database on fatalities and injuries resulting from inebriation, walking drunk does not have the same potential to harm someone else that driving does, and people often drive much farther than they walk. For that reason, the toll of drunk driving still dwarfs drunk walking. According to Levitt and Dubner:

But the number of people killed while walking drunk is still high. It makes New Year’s Eve and Day the deadliest time of the year for pedestrians.

We expect the pub crawl industry to move quickly to squash this story. And then be forced to pay for ads promoting “designated walkers.”