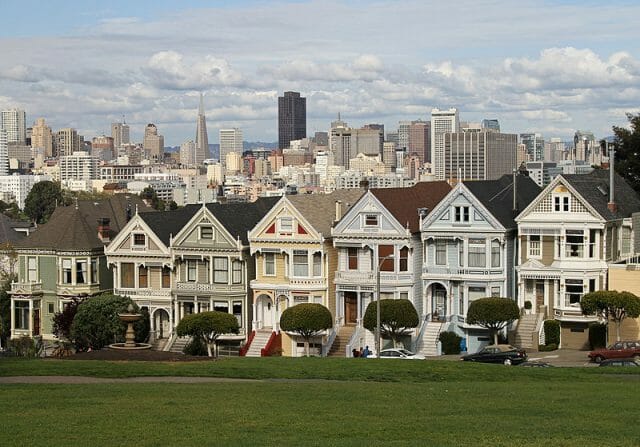 Update: The New York Times issued a correction to their article based on this analysis.

Over the weekend, The New York Times published an article about San Francisco real estate titled “The Housing Market with Nowhere to Go (But Up).” As we’ve previously shown, San Francisco rent and housing prices are going way up. The Times article does a good job of pinpointing the culprit – many people are moving to the city, yet the supply of housing is somewhat fixed. So, prices go up.

The article’s most juicy detail describes how people are massively overbidding for houses, presumably because they have so much money that a million dollar house is a rounding error in their budget. The article cites Redfin, the real estate brokerage, and states:

“Redfin estimates that, on average, homes in San Francisco are selling for 60 percent to 80 percent over asking price.”

When you read this, you can’t help but feel hostile toward whoever is bidding “60 to 80%” above asking price. The average reader won’t be able to make such a cavalier bid on a property, and this bidding war will escalate real estate prices even further. It’s hard not to feel jealous of these people buying homes like money is no object.

There is only one problem. This person who overbids “60 percent to 80 percent” does not exist. The statistic supplied by Redfin and quoted in The New York Times is 100% inaccurate.

First off, let’s gloss over that Redfin is citing an average that ranges from 60% to 80%. Averages are typically a number, you know, not some indeterminate range. If someone asks you Derek Jeter’s batting average, you wouldn’t say .250 to .333 unless you were the world’s laziest statistician.

So, we thought we’d dig into the data. How much are homes being listed for in San Francisco and how much are they eventually being sold for? Our friends at Polaris Pacific, a firm that helps companies sell condos, were kind enough to provide us with the transaction data for every condominium and detached single family home sale in January and February of 2014. We dug into the data to find out the listing price of San Francisco homes and how much people overbid for them so far this year.

So far so good, but let’s look at the distribution of the homes’ final sales price versus their asking price. For every transaction, we calculated how much people overbid on a percentage basis. We then looked at the median and average amount that these homes sold for above ask. The notion that the average house is selling for 60 to 80% more than listing price is completely wrong. Yes, there is more than one way to calculate this “over bid” number, but none of them will get you a number that’s not in the single digits.

The Times article cites the example of a house that was listed for $895K and sold for $1.45 million, a premium of 62%. Reading the article, you’d assume that this is just an “average” San Francisco transaction. But it’s not. This is a cherry-picked example that happened in December 2013. The market is up so far in 2014, and yet there are zero transactions that happened at 60% over asking price.

So, there you have it. Yes, San Francisco rent prices are exploding and housing prices are rising fast too. It’s an important story, and it’s one that we documented as well. (We’ve even profited from this story by selling this data to companies.) But it’s a shame to try to make a good story even better with inaccurate data.

We don’t mean to imply that either The New York Times or Redfin has a malicious agenda, it could have been an honest mistake. Maybe Redfin misspoke or were misquoted and they meant something else? But if they did, certainly they should have asked the Times to correct this glaring error.

Then again, who benefits from this narrative that you must bid “60 to 80%” more than listing price to buy a house? The real estate agents and companies like Redfin that make money during housing booms, and who just happened to supply the data in question.