Mouseover a neighborhood to learn more.

And that’s just for a run of the mill neighborhood in the city. If you want to live in a spiffier spot in San Francisco, be prepared to pony up big time cash. A one bedroom alone will cost you almost $3,500 in SOMA or $3,200 in Russian Hill.

One Bedroom Price by Neighborhood

Rents aren’t just high in San Francisco, they’re rising quickly. In June 2011, the median price for a one bedroom was $2,195. Two years later, the price of a one bedroom has increased 27% to $2,795. During the same time period, the price of a two bedroom apartment rose 33%. That's almost 10 times the rate of inflation during those two years. 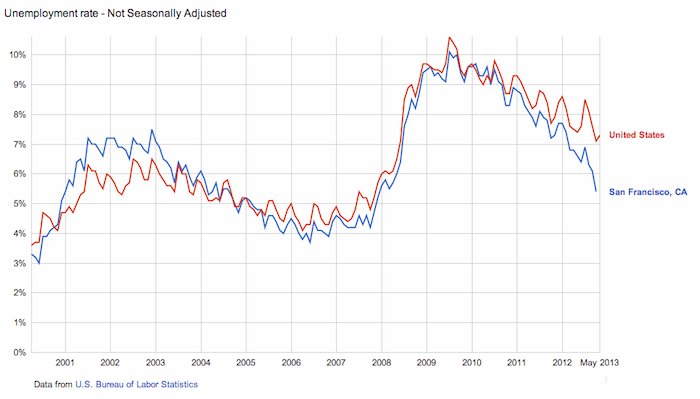 So more people who live in San Francisco have jobs. The population is also growing. From 2000 to 2010, 28,500 new San Franciscans arrived in the city. From 2010 to 2012, the city welcomed another 20,600 inhabitants in just three years. Many people have ascribed this growth in San Francisco's population to its surging technology sector.

While demand for housing has increased, the supply of housing is relatively fixed. This causes prices to rise. In San Francisco last year, only 269 new units came on the market. In 2011, The US Census put the vacancy rate of apartments in the San Francisco Bay Area (including Oakland and surrounding suburbs) at 4.1% versus 7.4% nationally. If you’re lucky enough to have a rent controlled apartment in San Francisco, you’re staying put, which further tightens the supply of apartments available for rent.

The supply of apartments is fixed in the short term, but can increase once developers buy land, get permits, secure financing, and construct a new apartment building. If you walk around upper Market Street, you’ll notice there’s actually a lot of new apartment buildings under construction. Due to new construction, it's estimated that about 8,000 new units will come on the market between now and 2015.

Thinking about moving to San Francisco? Need to get a new apartment in the city? Here’s a sobering tool that will calculate your rent by neighborhood and number of bedrooms. Hopefully you like having roommates!

To get occasional notifications when we write blog posts, sign up for our email list.
Editors note: Some numbers have been updated since as original publication as we update our methodology.