Ranking the Most (and Least) Diverse Colleges in America 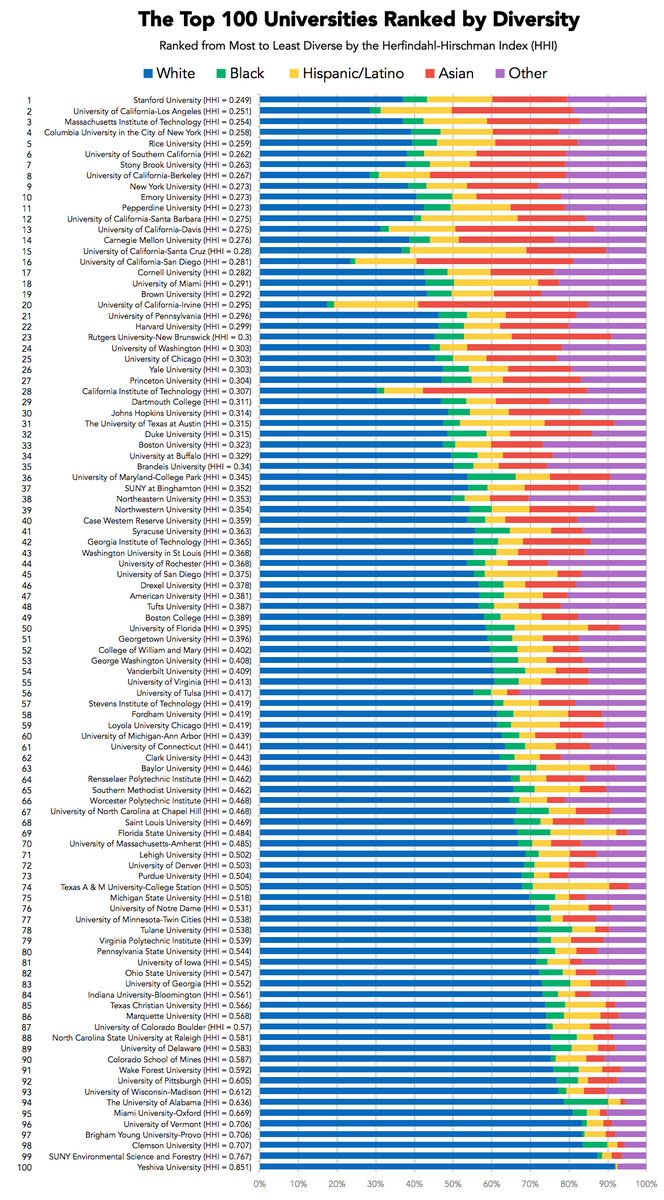 Using data from the Department of Education and from Priceonomics customer BestColleges.com, we looked at the makeup of each school’s student body by race/ethnicity.

We classified the level of diversity using the Herfindahl–Hirschman Index (HHI), a calculation that measures diversity in a variety of settings—such as the competitiveness of a business market or the biological makeup of an ecosystem. In the past, we've used this methodology to assess the diversity levels of American cities.

To quantify the ethnic/racial diversity on college campuses, we used five racial/ethnic categories identified in the government’s College Scorecard data: White, Black, Hispanic, Asian, and Other. (The Other category includes anyone who identified as more than one race/ethnicity or a race/ethnicity not included in the list, and anyone who did not provide their race/ethnicity.) We excluded any colleges that were not geared towards undergraduates, had fewer than 500 students, or for which the College Scorecard did not have data on the racial composition of their student body.

We then created an index for all schools. A lower index number reflects a more diverse student body.

We found that universities in California, like Stanford, UCLA and UC-Berkeley, have particularly diverse student bodies, while schools in the Midwest are typically less diverse. Stanford University, the top school in terms of diversity, is three times more diverse than the lowest ranking schools, Yeshiva University and SUNY Environmental Science and Forestry.

We also found that larger universities tend to have more diverse campuses than smaller colleges, and that the very best schools, which often have the most financial resources, tend to be particularly diverse.

We began our examination of campus diversity by looking at universities ranked in the top 100 for academics by U.S. News and World Report. Schools are ranked from most to least diverse by HHI.

Stanford, with an HHI of .249, has the most equal mixture of racial/ethnic groups of any top 100 school. Clemson, SUNY College of Environmental Science and Forestry, and Yeshiva University receive the lowest diversity scores; they are predominantly White. In fact, almost every school ranked near the bottom in terms of diversity has a predominantly White student body.

The University of California (UC) campuses are particularly diverse by HHI, accounting for seven of the top twenty most diverse colleges in this ranking. The California schools have high percentages of both Asian and Hispanic students, which fits the historical trend of immigration to the Golden State. UC-Irvine ranks twentieth overall, but has the lowest overall percentage of White students at 17%.

Next, we measured diversity by HHI for the 100 largest universities by student population in the United States. Thirty-one of these schools were also listed in U.S. News and World Report’s top 100 list for academics. 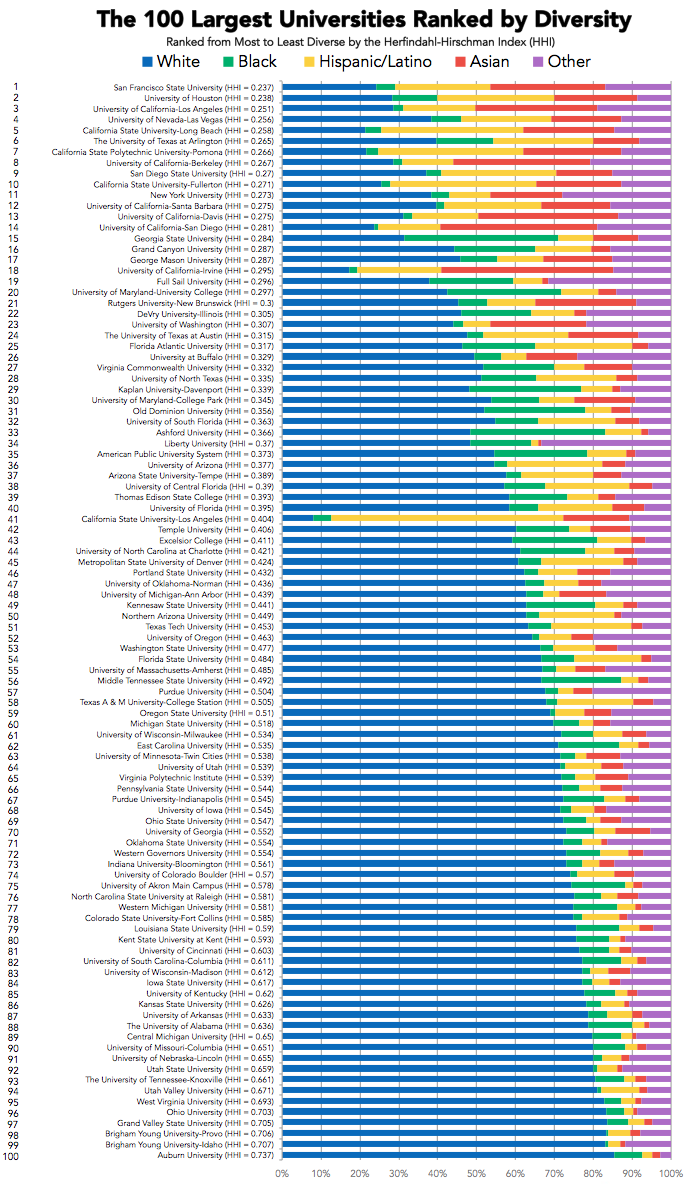 Our analysis of the 100 largest universities once again highlights the diversity of California schools. Six of the top ten are public universities in California. 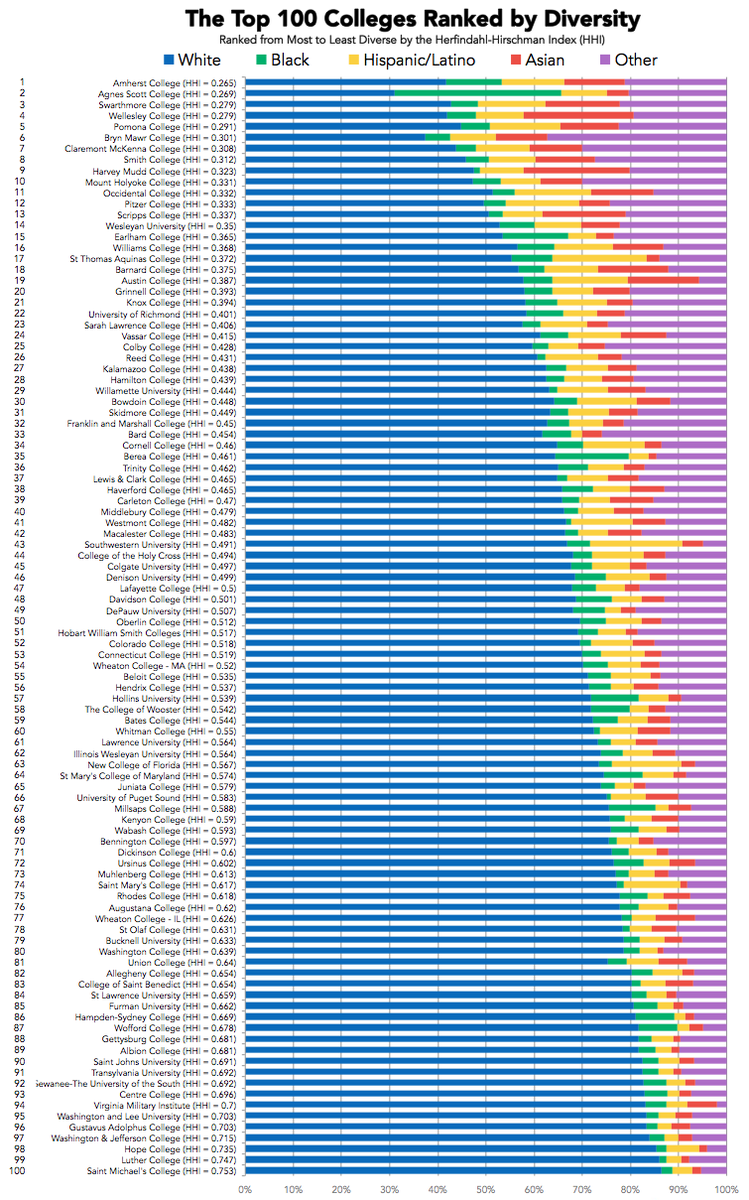 Overall, the top 100 liberal arts colleges are less diverse than their university counterparts. The median score here was .514, compared to a median of .395 for the top 100 universities.

Of the 10 most diverse liberal arts colleges on this list, five of them are all women’s colleges (Agnes Scott, Wellesley, Bryn Mawr, Smith, and Mount Holyoke). This trend may seem surprising, but it is supported by these school’s founding ideologies. Women’s colleges were created to educate people excluded from the ivory tower, and although this initially meant women, administrators applied the same inclusive attitude to admitting minorities.

These rankings call tell us which colleges have diverse student bodies, but they can’t tell us which colleges are achieving all their diversity goals. Diversity refers to more than just racial background, and admitting a diverse student body does not guarantee that a college will also hire a diverse faculty, create a balanced environment, or facilitate interactions between different types of students.

Yet for college applicants wondering whether colleges’ glossy brochures—which feature smiling groups of racially diverse students—actually reflect reality, these rankings are a guide. Students who prize racial/ethnic diversity as part of their education should look at larger universities, especially those in the University of California system. And students seeking a more intimate setting should consider standout liberal arts colleges like Amherst, Swarthmore, and America’s women’s colleges. Because while many schools are remarkably diverse, plenty of colleges remain pretty much all white.