Cable television has had a good run.

Cable providers own the expensive physical infrastructure that brings Monday Night Football, Game of Thrones, and Law and Order marathons into people’s homes, and the great expense of replicating that infrastructure has made them secure in what Adam Davidson of Planet Money refers to as “quasi-monopolistic dominance.”

The result is the bundling of cable television. Rather than select a few channels to pay for à la carte, customers pay for hundreds of channels because providers offer cable as an all-or-nothing package deal. Without competitors to offer an alternative, nothing stops cable providers from boosting their profits this way. (Except possibly senator John McCain. He has co-sponsored legislation to ban the practice, although it has yet to make it to a vote.)

Millions of Americans have no interest in watching sports. But they sure don’t act like it as they spend $66 a year on ESPN. The below chart from Planet Money breaks down the cost of a cable bundle: 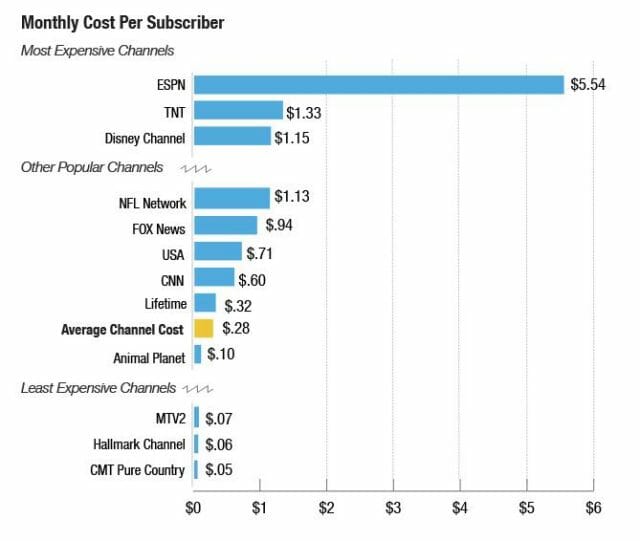 The bundle has a long tail of channels – from the Weather Channel to Comedy Central to Bravo – that cost under a quarter per subscriber per month. (C-Span is one of the cheapest at 6 cents per month.) A smaller number of channels cost around $1 per month. And then there is ESPN, which costs over four times more than its costliest counterpart.

Of course, for SportsCenter junkies and college football uberfans, $66 a year for ESPN is a steal. Sixteen dollars a year for TNT is a bargain for this author’s Law & Order watching family. And Fox News or CNN for under $12 is a blessing for grandparents everywhere who leave the news on all day.

Americans malign the bundling of cable television because, as Mr. McCain put it, it has “all the choice of a Soviet election ballot.” From this perspective, the cable TV bundle is a tax on everyone who wishes they could just pay for the content they actually watch. It’s a tax that bolsters cable television’s bottom line. Davidson notes that cable bills doubled over the past decade and that a number of channels have profit margins of 50%. Ten percent of America’s wealthiest individuals earned their fortune from media empires.

But the cable television bundle also benefits couch potatoes. Someone who actually watches a large number of channels can only do so at an affordable rate because every other cable subscriber pays for those channels as well. The bundling of cable television taxes viewers who watch television sparingly to subsidize the cable bill of constant TV watchers. And since the cable bundle provides a never ending stream of content as the sole option, it is also the great enabler of Americans’ 5 hours a day television watching habit – the equivalent of your friend who presses drinks into everyone’s hands all night.

But the role cable plays in supporting the creation of critically acclaimed shows like Game of Thrones and Breaking Bad also means that it has something to offer sparing television viewers.

As we explored in yesterday’s post, The Economics of a Hit TV Show, an imperative for cable channels like AMC – broadcasters of hit show Breaking Bad – is to justify their presence on the cable bundle. For these channels, the fees they receive from cable providers make up roughly half of their revenue. Despite their critical acclaim, shows like Breaking Bad, Mad Men, and Game of Thrones rarely exceed the average viewership of a network like CBS, even for long awaited finales or premiers. But having must-watch shows gives AMC leverage to negotiate higher fees for its programming from cable providers like Comcast and DirecTV. So while cable bundling subsidizes couch potatoes, it also subsidizes expensive, niche shows like Mad Men that might not make it in a world where people pay only for the content they actually watch.

Many commentators predict the end of the cable bundle as young Americans choose to skip ever increasing cable fees in favor of on-demand services like Netflix. But that shouldn’t hurt our favorite shows. With the advent of on-demand services, creating hit shows is more important than ever. With innumerable shows and movies available with a click, a hit show is the only way for an AMC or a Netflix to stand out from the crowd. For both the couch potato and the sparing viewer of Mad Men, the television business model – past and present – is working in their favor.