The Rise of the $8 Ice Cube In 2007, during a business school lecture at UCLA, Roberto Sequeira had a revelation. What if I could design the perfect business? he asked himself, something niche, high-margin, scalable. He ran through a rolodex of potential consumer items — watches, food, clothing — before arriving at his moment of clarity: he’d start an ice cube company. But not just any ice cube company — one that sold its wares at $8 a piece. Today his brainchild, Gläce Luxury Ice, caters posh events at the Playboy Mansion and L.A. Fashion Week; for the mere price of $325, 50 Gläce cubes are all yours — complete with an “elegant” resealable bag.

For most of us, filling a 50-cent plastic tray with tap water and throwing it in the freezer works just fine. Ice cubes are a virtually free resource (save for the inconsequential amount of water used, and the electricity to power your refrigerator). But according to Gläce and other luxury ice cube companies, we’re vastly underestimating the importance of high-end ice.

What exactly makes these ice cubes so special? Upscale grocery store chain Dean and Deluca featured the luxury ice cubes in their catalogue last year with this quite serious justification for their price:

“Gläce Luxury Ice is a meticulously designed and differentiated ice brand specifically designed for use in premium drinks and cocktails. The Gläce Mariko Sphere is a perfectly spherical 2.5-inch piece with a melting rate of 20-30 minutes. The Gläce G-Cubed, a symmetrical 2.5-inch cube, has a dilution rate of 20-40 minutes. Gläce Ice pieces are individually carved from a 300-lb. block to ensure flawless quality and a zero-taste profile, never contaminating the essence of premium liquors and drinks.”

“Melt rate,” “zero taste profile,” “individually carved” — even two little fancy dots above the “a” (the correct term is umlaut, if you were curious) — but no amount of pseudo-scientific literature or delusional classiness can convince us that this is anything other than ice — a resource that can be created for pennies on the dollar in any kitchen across America. Never mind the fact that these claims are egregious: an editor at the Miami Herald purchased a Gläce ice cube to test its “dilution rate of 15 to 40 minutes,” and was sorely disappointed:

“Our plan was to put it in a premium drink and then drink it, but by the time our photographer finished taking pictures of it, it had melted. So now what we have is a bag of water. But it’s luxury water. It’s Wäter. And we’re willing to let it go, to the right connoisseur, for just $50.” 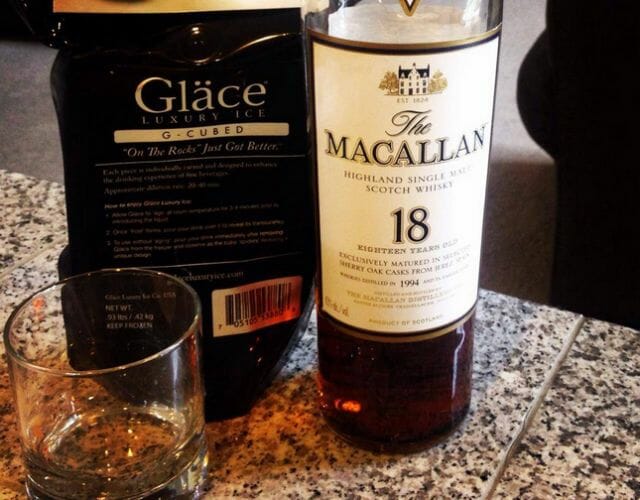 Last month, Priceonomics wrote about the ice business and extensively interviewed people in the market. We learned that these 300-pound, crystal-clear ice blocks are made by freezing water from the outside in. The center of the ice is agitated by a moving component to allow gases to escape; when the ice is near frozen solid, the center is drained and replaced by sprayed layers.

On their site, Gläce states that the cubes are ideal for high-end cocktails — those that employ splashes of $38,000-per-bottle liquors, and must not be diluted or contaminated by mere tap ice. It’s recommended that you let your Gläce cubes “age” for 3 to 4 minutes to bring out their true essence; while the spheres “will crackle and spider,” they “will not break apart like less deserving ice or home-made ice.”  Less-deserving ice. In addition to their cubes, Gläce also offers the “Mariko,” a sphere that the company claims “is the most mathematically efficient way to cool your drink” — though probably not so for your bank account: 50 “spheres” run $325 (same as their cube counterparts). Gläce wastes no time in providing another description pandering to high-brow consumers:

“The sphere is the most efficient shape in nature holding the greatest volume to surface area ratio of any other geometric shape. Purified of minerals, additives and other pollutants that may contaminate the taste of premium liquors and drinks, the Gläce Luxury Ice Mariko sphere is meticulously crafted to deliver and embody the finest accessory for top shelf drinks.  Each five pieces are elegantly contained in a re-sealable pouch equipped with a one-way air check valve to ensure freshness.”

“Handling of either the Gläce ‘Mariko’ spheres or ‘G3’ (G-Cubed) with ice tongs,” adds Gläce, “continues the unbroken chain of custody from manufacture to consumption.”

In the wake of Gläce’s “ingenuity,” other ice manufacturers joined the fun. Névé makes several high-end ice cubes, ranging from the “Collins” (a long, rectangular cube meant to be cracked into sections by a bartender) to “cornerless” shaking ice (because “the weakest part of a cube is its corner,” of course). Though Névé doesn’t list prices on their site, LA Weekly reports the cubes cost “somewhere between Häagen-Dazs and cocaine.”

Névé’s founder, Michel Dozois, had his “ice awakening” working as a bartender in Los Angeles. “l looked down at [my diluted drink] and I realized, it’s fucking shitty ice,” he told The Atlantic. “That’s what that is. The ice is fucking up all of my cocktails. Every one of them.” He calls his ice a “scientific experiment,” adding that “unless you taste it, you won’t give a fuck.” An ice entrepreneur and an orator. 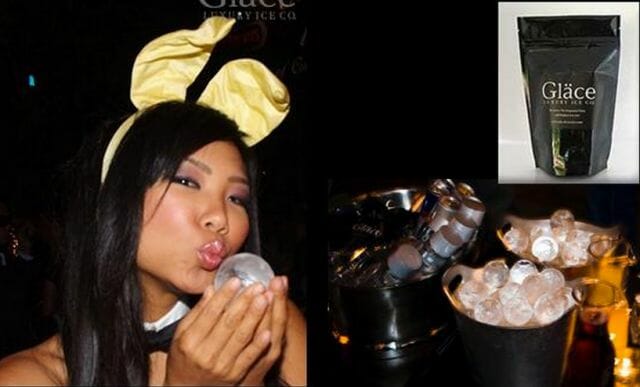 Gläce’s CEO maintains that luxury ice isn’t just for the “uber-rich,” though he admits his company explicitly targets that community. He spoke with UCLA’s Anderson School of Business in 2011:

“Everybody thought that starting a luxury brand business in late 2007 was crazy, but the people who I was marketing to were not necessarily affected by the recession, so I figured if we can do well during this time, imagine how successful we could be after the recession is over. Luxury begins when necessity ends. I don’t want people to think we’re only for the ‘super rich’ — you just have to be rich in craving a superior experience and have an extra $25.00 lying around.”

He adds that his cubes have seen great success. They’ve been featured in drinks at Playboy parties, the Pebble Beach Concourse d’Elegance, and “uber-lux” car shows, and are now part of Sysco’s restaurant distribution chain. The company maintains that the true power of their cubes lies in “tastelessness.”

Stephen Colbert agrees. “When you spend 75 dollars for a bag of hand-carved ice,” the host told a studio audience, “that is totally tasteless…it’s conspicuous consumption: an hour later you’re literally pissing your money away.”