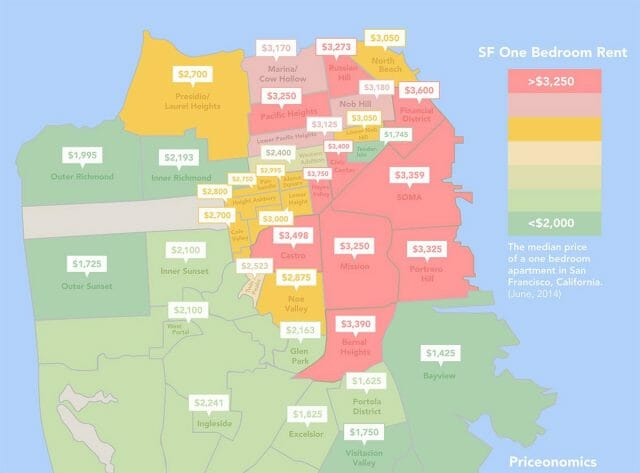 The San Francisco real estate market is, technically speaking, muy caliente. If you’ve looked for an apartment recently, or follow our blog, you know that rental prices have exploded and small homes sell for more than Detroit skyscrapers. San Francisco is a beautiful place, with a bustling economy that has drawn tens of thousands of new residents over the past few years. But the supply of housing is relatively fixed as large swathes of the city aren’t zoned for the type of high density housing that could accommodate the increased demand. So the price of housing has increased. 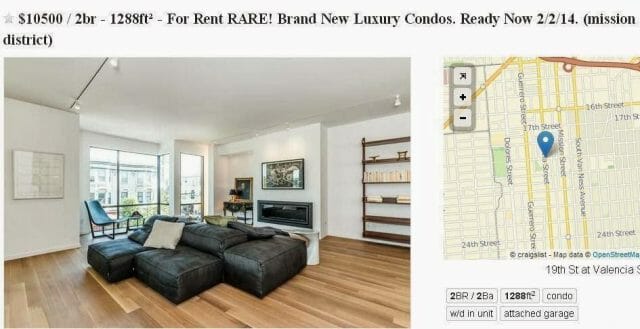 In this post, we’ll look at the current rental prices of San Francisco apartments, updating our report from last year. The principal data source is our data crawling business, which crawls the web and analyzes apartment listings (among other things) across the U.S., including San Francisco. We sell this kind of data to real estate investors, which helps fund this blog. Over the last few years, prices have exploded. We hope you held on to your rent-controlled place in Bernal Heights, where rent for a one-bedroom apartment has doubled in just three years. 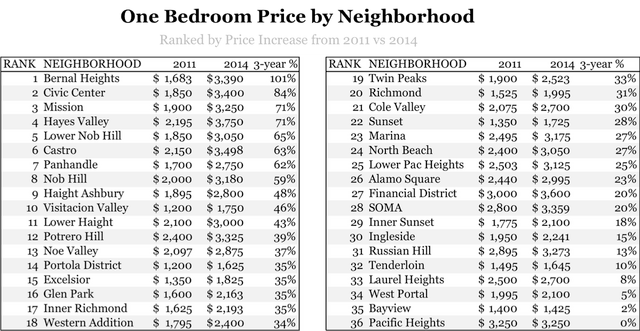 Over the past year, rents have continued to increase, but not uniformly. Asking rents have increased tremendously downtown, mid-market, and in the southern part of the city that offers the shortest commutes to the South Bay. 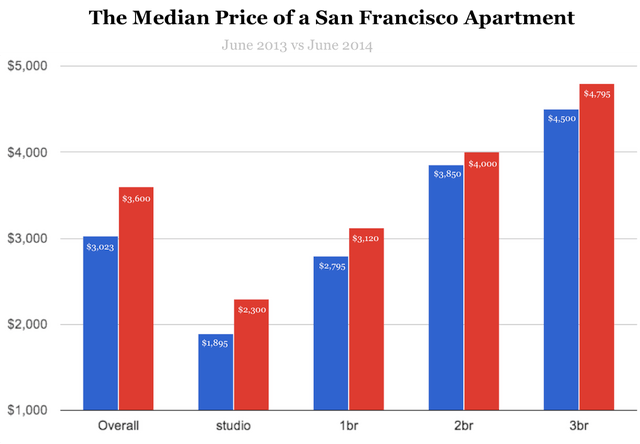 The Changing Landscape of the City

Long time San Francisco residents will notice something strange in the above charts: historically inexpensive neighborhoods, especially downtown and the surrounding areas, are now some of the most expensive. A couple factors are driving this change. First, the construction of new apartment buildings has been concentrated in downtown, Hayes Valley, and the Castro area around Market Street as part of the city’s effort to draw investment to those areas. These new apartments make up a lot of the inventory in those neighborhoods, and they are expensive. For example, the new NEMA building across the street from Twitter headquarters rents one-bedroom apartments from $3,955 to $5,344.

Proximity to the highways and shuttle buses that take tech workers south to companies like Google, Facebook, and Apple is also reorienting the real estate landscape. Living in neighborhoods like Bernal Heights or Portero was once (arguably) like living in a backwater, but these commuting-friendly areas are now expensive and popular. Glenn Park appears to be an exception as rents are lower, although its inventory of one bedroom apartments is limited and mostly consists of weird in-law units.

Are you moving to San Francisco and need some help determining how much you should expect to pay in different neighborhoods? This handy cheat sheet can help. It provides the median price of an apartment (as of the end of June 2014) for a studio or a one, two or three-bedroom apartment in each neighborhood.

And so dear reader, good luck on your apartment search. May you find your dream apartment in a sunny, affordable, and fun location. But who are we kidding, the odds are not in your favor.

The next post in this series presents data on the price of buying a home in San Francisco. To be notified when we post it, join our email list.