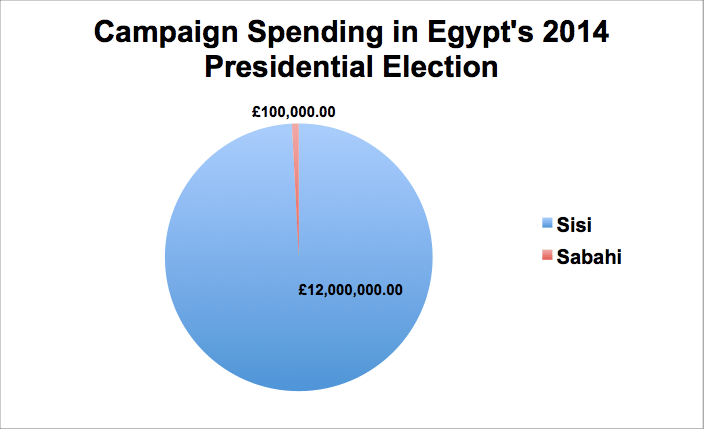 Egypt’s presidential elections — its second in as many years — began last week as Egyptians living abroad cast their ballots. Voting in Egypt itself will take place on May 26 and May 27. With the first votes in and the campaign period nearly over, former military commander Abdel Fattah el-Sisi has outspent his only presidential opponent, leftist politician and longtime political activist Hamdeen Sabahi, by over £11.9 million. That is 11.9 million Egyptian pounds (EGP), roughly $1.67 million. Put another way, Sisi is responsible for 99% of all campaign spending in Egypt. And that is an underestimate of the disparity.

Although Egypt has a population of over 80 million, its elections are in many ways small in scale. The current election allowed one month for the registering of candidates and a mere 3 weeks for campaigning — a rushed timeframe not dissimilar from previous elections. The law limited Sisi and Sabahi to a maximum 20 million EGP war chest, which is around $2.81 million and double the cap allowed in the 2012 elections.

Hamdeen Sabahi finished third in those 2012 elections, missing out on making a run-off between the top two candidates by a mere 685,000 votes. Yet as Egypt heads to the polls, no one believes he has a prayer of winning this time.

After millions of Egyptians filled the streets on June 30, 2013, to protest the ruling Muslim Brotherhood government, it was Sisi who addressed the nation — his uniform covered in medals — to announce that the army had arrested the president and suspended the constitution. Although he named a civilian interim president, Sisi has been treated as ruler of Egypt ever since, his ascension to the presidency considered inevitable.

Until the 2011 revolution, Egypt’s military dominated the country. Dating back to its 1952 revolution, each of Egypt’s three presidents came from the military; the armed forces are believed to control from 5% to 40% of the economy. Retired officers served as CEOs of state companies as well as governors. Sisi’s election will be a return to the status quo.

This sense of inevitability drives the difference in the two candidates’ campaign spending. Hamdeen Sabahi in fact spent less than 100 thousand EGP. According to his campaign manager, “The funds in the campaign’s bank account did not exceed 200 EGP [$28] so far, as the campaign has not received any donations from businessmen.” He added that most of the funds have been spent on conferences in poor areas staffed mostly by volunteers. Renting a billboard on one of Cairo’s bridges that span the Nile would have cost 170 thousand EGP, plus taxes. Sabahi will have one advertisement aired on a few satellite stations for two days, the result of an anonymous donation.

In comparison, Sisi’s campaign manager stated in an interview that Sisi had requested “minimum spending” and that “we only rented 30 billboards across Egypt, the rest are complimentary contributions by supporters of Sisi that we have no control over.” He also added that many advertisers offered discounts “when they know that the advertisement is in favour of Sisi.”

More importantly, the funding disparity is just one part of the conditions that both outside observers and members of Egypt’s opposition have decried as neither “free nor fair.” Sisi doesn’t need advertising. The state run media, on which most Egyptians rely for news, has extolled his virtues since last June for saving the country from civil war and “defending Egypt from terrorism.” A new law regulating protests contributed to the muzzling of dissent, as did the banning of the Muslim Brotherhood and a prominent protest group, among others.

In the Middle East, it is common to joke about how every election results in the current president winning 99% of the vote. As he attempts to convince Egypt and the world that he is restoring democracy, Sisi is already responsible for 99% of campaign spending. The results of expat voting, released today, show that he won 90% of the vote in most countries.