In a city like San Francisco (where Priceonomics, is based), the Vespa is among the most prized forms of transportation. It’s efficient, easy to park, great for darting around the city, and, perhaps most important of all, considered to be quite beautiful by many local citizens. In San Francisco you might see the occasional Harley Davidson, but the city’s hipsters lust after the Vespa (this author included). If people in San Francisco really like Vespas, there are probably places in America where people really like Harley Davidsons instead though. After all the Harley Davidson is the iconic American motorcycle. Where are these places? Are there cities that are filled with rugged individuals wearing leather instead of hipsters wearing skinny jeans and loafers? No doubt there are loaded cultural implications of preferring a Vespa over a Harley Davidson. In an effort to fuel potential culture wars, we set out to to figure out where in America Vespas and Harley Davidsons are most popular.

We decided to examine our database of secondary market listings to first see where Vespas were most commonly offered for sale. 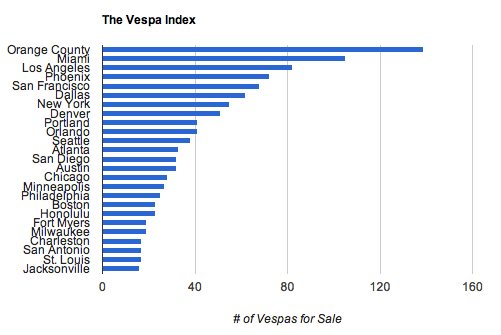 It turns out, many of the cities that like Harleys are different than the ones that like Vespas. Cold weather cities like Chicago, Boston and Minneapolis and cities in the Midwest win out.

Of course, both of the above indexes are biased towards larger US cities that have a high number of both of Vespas and Harleys for sale. To adjust for size, we decided to try to find places that Vespas were popular relative to Harley Davidsons. These are the places where Vespas reign supreme and Harleys are less popular. This analysis makes it clear that Vespas are most popular (relative to Harley Davidsons) in Santa Barbara, Orange County and New York City. Many of the cities that ranked well in our previous “Hipster Index” also perform well here.

In the past, Priceonomics has shown great interest in figuring out where hipsters reside in America based on their supposed consumption patterns (fixed gear bikes, Priuses) and where anti-hipsters live as well (Hummers). In this analysis we’ve identified where Vespas are popular and Harley Davidson are not. These may be the most Hipster places in a America. Or, they may merely be home to rabid scooter enthusiasts.